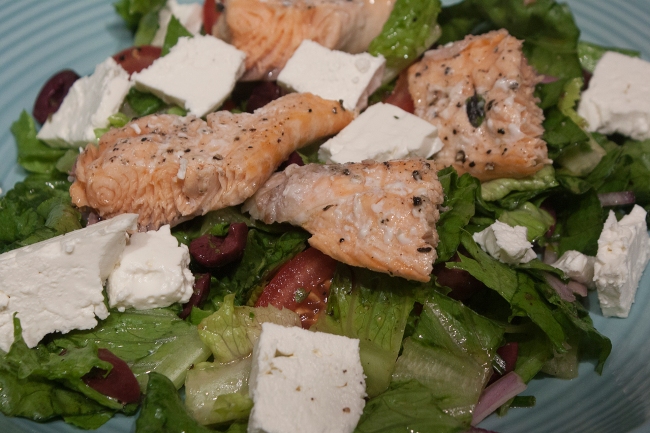 Dinner Monday night – Greek Salad with Oregano-Roasted Salmon – was perfect for summertime: it features tomatoes, which are starting to come into season, and only requires that the oven be on for a short while, which keeps the kitchen from getting too hot. Tony got this on the table, from start to finish, in 30 minutes. Here’s how he did it:

I started by doing all the prep work first, as I usually do: chopping the oregano, olives, chives, and Romaine lettuce and slicing the onions, tomatoes, and cheese. (We forgot to order cucumbers, so we skipped that step, but would definitely add them when we make this again.)

I then turned to the fish. I lined a baking pan with foil, put a rack into the pan, and laid about ten sprigs of oregano on the rack. I rubbed the salmon (a single fillet weighing about 3/4 of a pound) with olive oil, sprinkled it with salt and pepper, and put it on the oregano, skin side up. I then put the fish into a 425 degree oven for about 12 minutes.

While the salmon was cooking, I made the salad dressing by combining the oregano, lemon juice, and olive oil in a large bowl and then adding the olives, plus some salt and pepper. I put aside about two or three tablespoons of dressing and then added all the veggies to the bowl and mixed everything together until the veggies were well-coated with dressing.

When the salmon was done, I took it out of the oven and let is rest for a couple of minutes, at which point I peeled off the skin. I broke the salmon into about eight pieces, plated half the salad onto each of two plates, and then laid the salmon on top. I then broke the feta cheese slices into big pieces and arranged them on top of the salad. I finished by drizzling the salmon with the dressing I had put aside.

The salmon was cooked perfectly; it was flaky and moist. The salad was super-flavorful, with the lemon juice and olives in the dressing combining with the feta to give the salad a nice zing. We paired it with (appropriately enough) a Greek wine suggested by Michael from Wines by the Flask: a 2012 Antonopoulos Moschofilero, which was light and crisp and stood up well to the powerful flavors in the salad.

As I mentioned above, I would add the cucumbers to the salad next time. We’re planning another trip to Greenport in August and will stock up on heirloom tomatoes, which will give this dish an interesting twist!