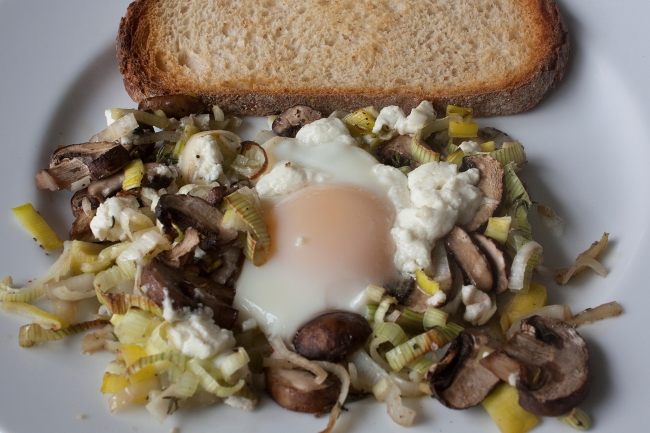 Tony had originally planned to make Eggs with Leeks and Mushrooms for dinner  Thursday night, but instead had some fantastic tacos from Taco Bono at Broadway Bites, a seasonal culinary pop-up market in Greeley Square Park in Herald Square. So, the eggs ended up being breakfast on Friday, which was perfect, as we were taking the day off to go to Governor’s Ball and had time to make a nice breakfast – though this dish only took about 30 minutes from start to finish. Here’s how Tony did it:

Since I was using a pan about half the size of the one suggested in the recipe (yes, I measured the pans and calculated the relative surface areas, because I am a nerd), I decided to cut the recipe in half. As things worked out, it would have been better to just make the whole recipe in the smaller pan, but more on that later.

After lining the pan with parchment paper, it only took me a few minutes to slice up about 4 ounces of mushrooms and the leek left over from the Tarragon Chicken with Fresh Herbs, as well as to strip a teaspoon of leaves off the thyme sprigs. (We really love thyme, especially with mushrooms, so there was no way I was cutting this part of the recipe in half!) I spread the mushrooms and leeks on the baking sheet, drizzled them with olive oil, sprinkled on the thyme, plus some salt and pepper, and mixed everything to coat. I then put the sheet into a 400 degree oven for 10 minutes.

After about 10 minutes, the mushrooms and leeks hadn’t browned much, so I put them back in the oven for five more minutes. In retrospect, this was not a good idea, nor was halving the recipe. What I didn’t account for was the fact that the leeks and mushrooms would reduce in size as they cooked. (To quote George Costanza from Seinfeld: “Significant shrinkage!”) Not quite the end of the world, but when it was time to make the hollows to hold the eggs, the “hollows” were looking more like “shallows” and much too small to actually hold an egg. I improvised, and pushed the edged of the mushroom/leek mixture in a bit, which mostly solved the problem. I say mostly because there was really only room of two eggs, not four. In any event, the sheet went back into the oven for eight minutes, at which point the eggs were cooked just the way we liked them – white mostly set, yolks still pretty runny.

While the dish didn’t turn out exactly as expected, it still made of an excellent breakfast. The mushrooms and thyme gave everything a nice floral/earthy note and the leeks added just the tiniest bit of bite. I served this with some sourdough toast and hot, black coffee, for a special weekday breakfast.