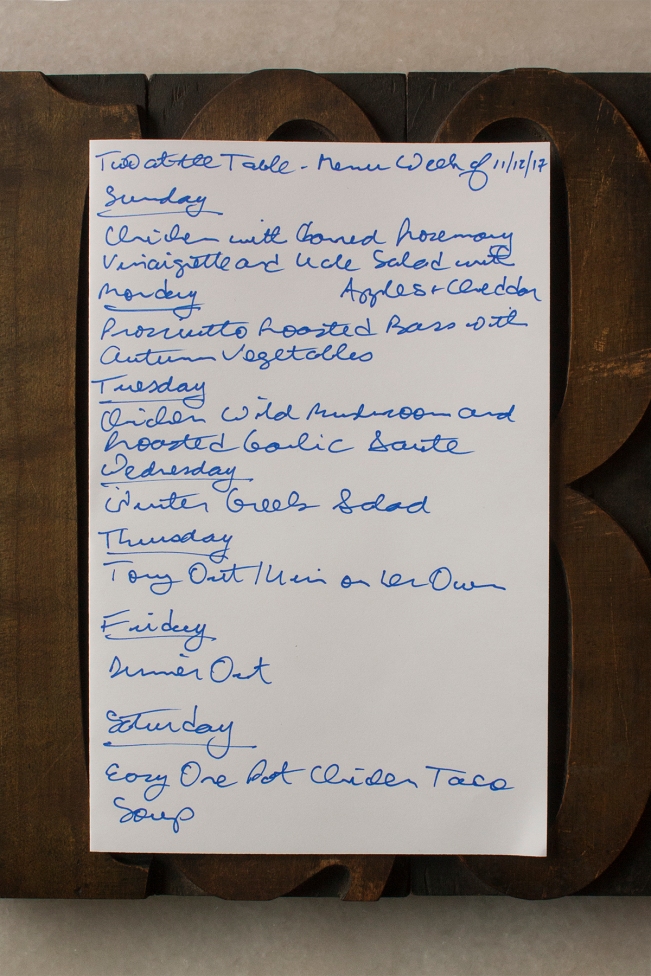 We’ve been doing our usual amount of cooking the past few weeks, but just haven’t had time to post our menus. For example, one great dish we made the week before last was Food Network’s Peppercorn Rubbed and Grilled Flat Iron Steak. This recipe uses a LOT of pepper (1/4 cup of coarsely ground black peppercorns and 1/4 cup of coarsely ground green peppercorns), but somehow manages not to be overwhelmingly peppery. We made a few hearty salads that same week, so we were able to combine left over steak and left over salad to make some pretty awesome lunches.

We also made Ina Garten’s Roasted Cauliflower Snowflakes to go with the steak. Neither one of us is a fan of cauliflower — we’ve both eaten enough mushy and bland florets to put us off the stuff for good — but we were willing to try this recipe. It turned out great and totally and completely changed our minds about cauliflower. We used a white head of cauliflower for this dish, but have seen some very pretty purple and gold versions in our local farmers’ markets, so we’re going to have to experiment.

That said, we have six new recipes to try out this week, so we wanted to post our weekly menu and share them all.

On Sunday night, we’ll make Food & Wine’s Chicken with Charred Rosemary Vinaigrette. We had originally planned to have this last night (Saturday), but just didn’t feel like cooking, so we moved it to Sunday night. We’ll have the chicken with The New York Times’ Kale Salad with Apples and Cheddar. We plan to make the full recipes, so we’ll have enough for lunch a day or two this week.

We’ll have seafood on Monday night, specifically Ina Garten’s Prosciutto Roasted Bass with Autumn Vegetables. We’re making two changes to the recipe, one a bit major and one a bit minor. For the major change, we will use cod instead of the striped bass or halibut called for in the recipe. This will save us a little money, and we think it won’t impact the recipe too much. We’re also going to eliminate the potatoes from the “autumn vegetable” mix. This is partly because we’re trying to watch our starch intake and partly because the other vegetables in the recipe (butternut squash, parsnips, and carrots) sound more exciting than potatoes.

We’ll return to a chicken dish (and a Food & Wine recipe) on Monday night, when we make Food & Wine’s Chicken, Wild Mushroom, and Roasted Garlic Sauté. This a “test run” for this dish, in that if it turns out well — and we have no reason to think it won’t — we’re going to experiment with different kinds of mushrooms and see what we like best. Again, we’ll make the whole dish, so another yummy lunch to look forward to!

We’ll go vegetarian on Wednesday night when we make Tasting Table’s Winter Greek Salad. As we mentioned above, we’ve made quite a few salads in the past few weeks, including Half Baked Harvest’s Roasted Squash, Caramelized Fig, and Feta Salad and Epicurious’ Sautéed Kale with Kohlrabi, so we’re excited to try another one.

Kim will be on her own on Thursday, as Tony will be away on day trip to Washington, DC. We also have plans for Friday night, when Kim, along with six of her fellow volunteers, will be officially announced as one of the New York Junior League’s 2017-2018 Outstanding Volunteers.

We’ll be back in the kitchen Saturday when we make The Kitchn’s Easy One-Pot Chicken Taco Soup. We always like having soup around in the fall and winter and if the weather next weekend is like it’s been this weekend (i.e., COLD!), having a big pot of soup to warm up the apartment sounds just about perfect. This recipe also sounds like the kind that makes us look for excuses to walk down the hall (“I’m going to go recycle this Post-It note!” and “I need to ask the neighbors if I can borrow a cup of water!”) so we can walk back into our apartment over and over and enjoy just how great our home smells!