The  Tomato, Chard, and Gruyère Casserole, (also known as a panade, a giant Provençal casserole) was a fair amount of work—but well worth the effort for a delicious dinner with either plenty to share or leftovers.

I started first with the five and a half pounds (!) of Swiss chard which has to be de-stemmed and then boiled for two minutes. It is a lot of chard to de-stem! For me it was about four large bunches. Since I knew it was going to be eventually chopped, I did not worry about how beautiful my de-stemming efforts were and simply worked quickly. I had smartly started the water to boil so as I had a good amount of chard de-stemmed, I would start it to boil. Much like spinach it quickly cooked down. I ended up boiling the chard in three batches and then let it cool in the colander as I worked on the other prep. After the chard cooled, I squeezed out the excess water.

I thinly sliced the two large onions and stripped thyme leaves from the stems. I had purchased a loaf of peasant bread that was pre-sliced in perfect half-inch slices so that was one step I could skip.

Since I knew the onions would take a while (12 minutes) to sauté, I got those going in some olive oil with the thyme. While I kept an eye on the onions, I turned my attention to slicing the tomatoes, grating the cheese and also got the oven pre-heating to 400 degrees. I also had a few moments to butter the baking dish, put in the first layer of bread and tomatoes and add a sprinkling of salt and pepper to the tomatoes. I also started the three cups of chicken stock simmering.

Once the onions had softened, I added the wilted chard and dry white wine. Things were really starting to smell good!

Once the onion/thyme/chard mixture was cooked, I added half of it on top of the bread/tomatoes and then sprinkled on half the cheese. For the next step, I felt the directions were a bit vague and I think I was supposed to do another layer of bread, then tomatoes, then onion/thyme/chard and then cheese, then more bread. But despite having a bit more bread than the recipe called for, I definitely did not have enough for three layers of bread. The recipe had called for using a 10-by-15-inch baking dish but the pictures from the magazine version of the recipe clearly showed a large round casserole, which I thought was the same size as mine. Clearly not based on running out of ingredients, but (spoiler alert!) the dish still turned out great.

So, I just added a layer of tomatoes, then a layer of the onion/thyme/chard mixture and the remaining cheese. I then put the remaining bread slices on top. I then poured on the stock over the casserole and pressed it with a spatula (kind of reminded me of making stuffing!). Then I brushed the top pieces of bread with melted butter.

Into the oven it went, covered in foil for one hour. In about 20 minutes it started to smell AMAZING and it seemed like a long wait (but ultimately worthwhile) for dinner. After an hour, I removed the foil and let it bake another 10 minutes. It was so heavy that Tony had to be the one to get it out of the oven and then it had to rest for another, very long 10 minutes. 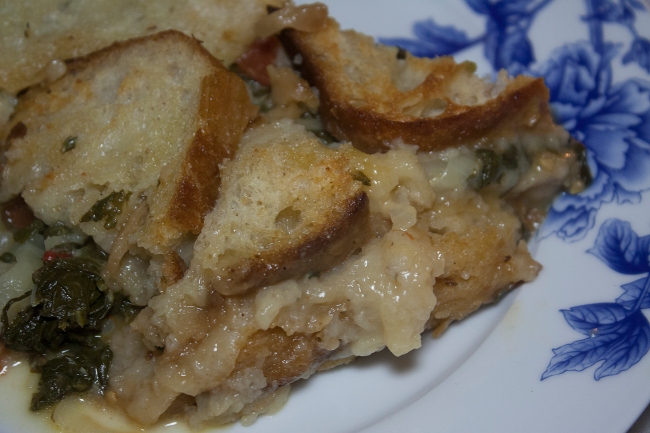 The panade was gooey and delicious as promised and it paired nicely with Wines by the Flask’s suggestion of a 2012 Chateau des Tours Brouilly, a light bodied red that provided a nice balance with the rich cheese and savory vegetables.

I would definitely make it in the round casserole again using more bread to make three layers of bread and probably would also add one or two more tomatoes to account for the change is size of the dish. In addition, the recipe suggested that you could do the chard up to two days in advance, which I think is a nice idea to spread out the work (and the multiple dishes wash!). Based on Tony’s request, this dish will be making reappearance a little later in the summer when tomatoes will be even more plentiful so stay tuned for updates.