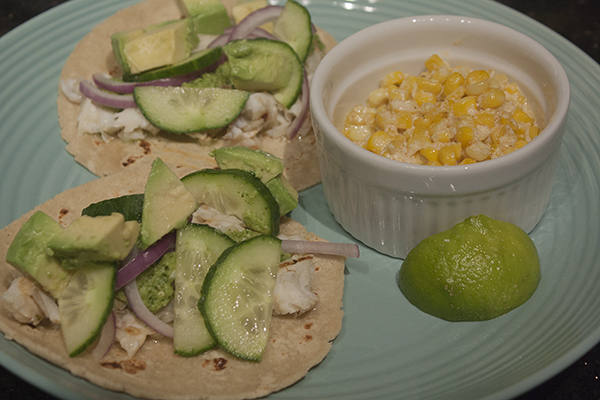 Monday night was a delicious, fun dinner with Food & Wine’s Fish Tacos with Tomatillo-Jalapeño Salsa and Food 52’s Roasted Corn with Lime, Parmesan, and Chili. Kim tells how it went.

I started by making the Tomatillo-Jalapeño Salsa. I first husked the tomatillos. The package I purchased had six tomatillos in it and the recipe only called for four so I decided to just increase the other ingredients a little bit so that I wouldn’t have leftover tomatillos.

I then quartered the tomatillos and put them into a blender. I added the cilantro, chopped jalapeño (I had one very large one), the juice of two limes, and a bit more than a tablespoon of vegetable oil. In just a few moments in the blender, I had a very fresh tasting tomatillo-jalapeño salsa. I added just a little bit of salt and it was ready for the tacos. We froze the extra salsa to make the tacos again or perhaps for something else.

I then turned my attention to fixing the garnishes for the tacos–slicing half moons of cucumber and red onion and dicing some avocado (with a good squeeze of lime juice to keep it from turning brown). I also put some corn tortillas in foil so I could warm them on the grill pan while I was cooking the fish.

I then made the marinade, which I cut in half since we were only making tacos for two and the original recipe servers four people.

I then turned my attention to making the Roasted Corn with Lime, Parmesan, and Chili first by preheating the oven to 400 degrees. Rather than ears of corn as the recipe suggested, I purchased some very tasty sounding Hudson Valley Harvest Sweet Corn and we were not disappointed. I started first by spreading the corn on a foil-lined, rimmed half sheet pan and then tossing with olive oil and salt and pepper.

As the oven was preheating, I made the “dressing” for the corn. I used one tablespoon of mayonnaise and one tablespoon of non-fat Greek yogurt. (I did not want to buy sour cream to use just one tablespoon and this turned out to be a fine substation.)  The recipe called for the mayonnaise, sour cream and milk to be at room temperature and by the time the corn came out of the oven, the entire dressing probably was at that temperature. I then added the quarter cup of milk, the juice of one lime, and some freshly grated Parmesan. I whisked it all together with the cayenne, tasked and adjusted the cayenne by adding a bit more.

For the last 10 minutes that the corn was roasting in the oven, I preheated my grill pan and let the fish (the recipe called for halibut which was not available so I used flounder) sit in the marinade for just a couple of minutes, I salted the fish and then grilled for about three minutes per side. After taking the corn out and tossing with the “dressing,” I flaked the fish and it was time to make some tacos!

Both recipes turned out great. The fish was moist and flavorful, but the best part was absolutely the tomatillo-jalapeño salsa which added wonderful freshness and brightness without overwhelming the fish. The garnishes of red onion, cucumber, and avocado were terrific compliments to the fish and the salsa. We will be making these again for sure and I’m really hopeful the extra salsa freezes well.

The corn was outstanding–an amazing combination of creaminess, acidity, and heat. It tasted so flavorful, it was surprising how few steps it took to make something so great.

This was a really fun and delicious dinner and like our other favorite fish tacos, definitely easy enough for a weeknight. It will be hard to choose between to the two for our next fish taco dinner!

2 Responses to March 2, 2015 – Fish Tacos with Tomatillo-Jalapeno Salsa and Roasted Corn with Lime, Parmesan, and Chili