Fish Tacos with Chipotle Cream make for a fun, quick, and tasty weeknight dinner. Here’s Kim’s take on how it went this past Monday night.

Even thought this is a very simple recipe, it is truly delicious and presents well enough even to serve for a casual dinner with friends, which we’ve done before. This time, we cut the recipe in half so we’d just have two servings.

While the fish was marinating, I got all the other ingredients and toppings together, first starting with the chipotle cream. I pretty much follow the recipe (I’ve made it so many times and it is so easy, I barely have to measure), but I do add just a little bit of salt to bring out the chipotle flavor even more.

I love the cabbage in the tacos, but rarely like to buy a whole cabbage. However, Tony was able to find a small container of shredded purple cabbage on Fresh Direct, which made for a beautiful and crunchy addition. Picking a few cilantro leaves off the bunch took no time at all and gave us a nice garnish.

We also had an avocado in the refrigerator and I thought that might make for a nice topping, so I sliced it and squirted on a little lemon juice to keep it from browning. I might have normally used some lime juice, but we only had one and I used half for the marinade and wanted to save the other half to squeeze on our tacos.

For the corn, I used some frozen corn, added a little salt and chili powder, as well as a little water. I then covered the bowl with plastic wrap and microwaved for about three minutes while I was grilling the fish.

One place I always deviate from the recipe is the step with the tortillas. Since I have a grill pan that goes across two burners on the stove, I use one side to grill the fish and the other side to warm (on low) the tortillas. I just wrap all four tortillas together in foil and turn the foil packet over after I turn the fish.

In no time at all Tony and I were building our own tacos and sitting down to a tasty dinner. As you can see from the photos below, I (top photo) went heavy on the avocado and Tony (bottom photo) went heavier on the fish! We paired the tacos with a fun beverage in honor of my Texas history: Ruby Redbird—a beer new to us from the Spoetzl Brewery, who makes Shiner Bock in Shiner, Texas, USA. It is made with one of my favorite Texas items, Ruby Red Grapefruit, and was a deliciously tart beverage to enjoy with the tacos. 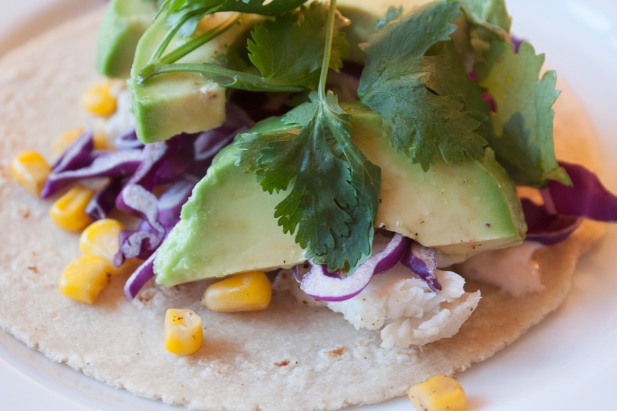