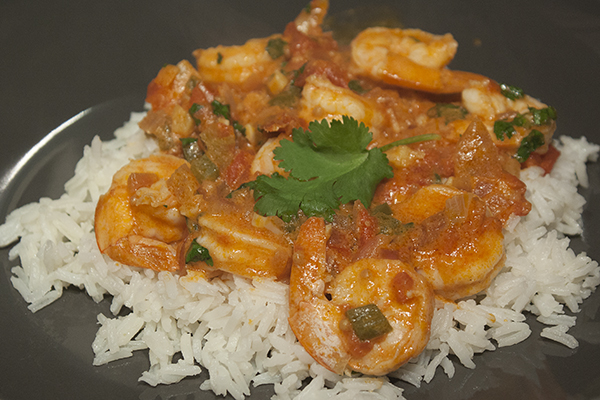 Last Tuesday night were transported to Morocco with some new flavor combinations for us. After last week’s success, we decided to continued with the exotic theme for this Tuesday night. While we’ve had Indian food many times before, this was our first attempt to make it. We were not disappointed! Kim tells how it went.

Admittedly, I looked at some Indian food recipes and was a little taken aback by the time and steps involved. So, when I found Emeril Lagasse’s  Indian-Inspired Shrimp with Coconut, Chiles, and Tomato I was very optimistic for a recipe that could deliver some different flavor combinations but also be realistic for a weeknight. It did not disappoint.

Thinking the basmati rice would take an hour, I looked at the directions for that first. I was pleasantly surprised that the basmati rice only took 25 minutes to cook! Following the package directions, I measured out the water, rice and butter and set aside to turn my attention to the shrimp dish.

I started first by doing the prep work: measuring out a quarter cup of vegetable oil and two teaspoons each of mustard seeds and cumin (the recipe said cumin seeds, which I did not have and did not want to buy, so I substituted ground cumin with terrific results). I then turned my attention to chopping a cup and a half of red onion (for me it was about one medium red onion, plus half of a small one left over from Monday’s fish tacos). After that, I chopped the chiles (I used one, very large jalapeño), and minced three tablespoons of ginger (I keep ginger in the freezer and defrosted it in the microwave for about 10 seconds before mincing it) and two tablespoons of garlic. I then measured out the quarter cup of tomato paste and made sure that the cans of diced tomatoes and coconut milk were accessible and ready to go. I had purchased shrimp that were already cleaned and deveined so they already to go when I needed them. The last thing to chop was the cilantro.

Before starting cooking the shrimp dish, I got the rice started. The shrimp part of the dish is pretty fast so after the rice cooked for about five to 10 minutes, I started on it.

In the Dutch oven, I started first by heating the oil over medium heat and then added the spices. It was already smelling great! I then added the onions, jalapeños, ginger, and garlic. I was very nervous about adding garlic at this step as I always seem to burn it but it worked just fine. I sautéed the ingredients, stirring occasionally, for about 7 minutes until the onions were slightly caramelized. In went the tomato paste; I gave it a good stir to ensure it was well incorporated and cooked everything for an additional two minutes. I then added the diced tomatoes and cooked an everything for an additional three minutes, until the liquid in the mixture was reduced by half. I turned the heat up to high and added the coconut milk. The entire mixture began to bubble and became even more fragrant and turned a beautiful orange color. After about three minutes, the mixture had reduced by half. During this time I had gotten the shrimp out, patted them dry, and seasoned them with salt. The shrimp went into the bubbling sauce and began to cook immediately. After five minutes they were ready. I turned off the heat, tasted the sauce (delicious!) and added the cilantro and a little more salt, which really brought it to the next level.

I plated by putting down a small scoop of rice, ladling the shrimp mixture over it, then adding a sprig of cilantro as garnish and our Indian-themed dinner was served!

The rice was cooked perfectly and made for nice base for the shrimp. The combination of spices with the coconut, ginger, chilies, and tomatoes was incredible, flavorful and just the right amount of spice. It was very different from anything we had made before. It sort of felt like we had ordered take out–but so much better!