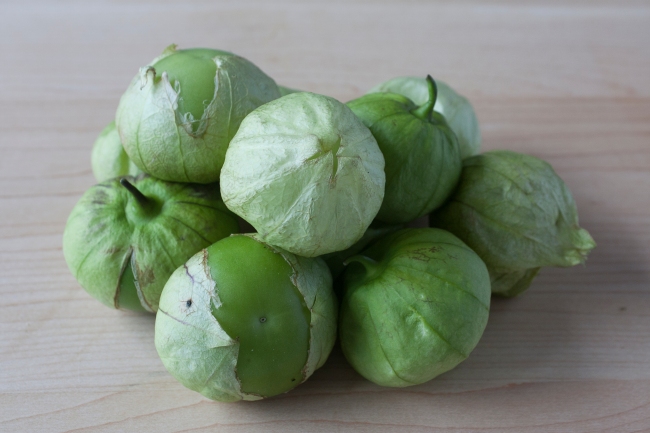 Saturday night, Tony made Green Chilaquiles with Chicken and Squash, one of the first fishers he ever made for Kim. Here he describes what was involved:

Before I start, I have to apologize to Kim. When I posted last week’s menu, I hinted that because of internet problems when Kim placed our Fresh Direct order, I might have to make a grocery store run to get some missing ingredients. Nothing could have been further from the truth. Working from an iPhone and alternating between recipes and the Fresh Direct Website, Kim was able to order everything I needed for this dish, right down to the radishes we used for a garnish. I will never doubt her grocery ordering abilities again : )

The thing to keep in mind with this recipe is that while each step is pretty easy, each step also takes a while to complete, so it is absolutely a weekend dinner. The prep isn’t very hard as all you need to do is chop some onion, peel some garlic, and dice two squash. The first cooking step (or last prep step, depending on how you look at it) in this recipe is to poach a chicken breast.  This is very simple and you can find detailed instruction in the recipe that accompanied the chilaquiles recipe, which you can access here. Basically, you simmer a chicken breast in water (to which you have added onion, garlic, and some herbs) until it’s done and then shred the chicken. It takes a little while – about 20 to 30 minutes in total – but is pretty easy. You can even use the resulting broth later on in the recipe.

Once the chicken is ready, you can start on the rest of dinner. The first step is to simmer the tomatillos in a saucepan of water. Pretty straightforward, but as with other steps in making this dish, you have to allow time to bring the tomatillos to a simmer and then keep them at a simmer for the 10 minutes noted in the recipe. Once this step is done, you put the tomatillos in a blender (I used a food processor) with the chilies, chopped onion, garlic, salt, and cilantro sprigs and blend everything until it’s smooth.

You next have to cook the tomatillo mixture for about five minutes until it thickens. I used our trusty dutch oven, which made this dish very easy, as I didn’t have to work about spilling anything when I stirred the ingredients. When I was done, the mixture looked like this (the blurriness of the photo is because of the steam coming off the tomatillos):

Next I stirred in the stock, brought the whole thing to simmer, and simmered for about 10 minutes, until the dish looked like this:

I stirred in the squash and let things simmer away until the squash was nice and soft. At this point, I also started toasting the tortillas in the microwave. I cooked them for two minutes, then flipped them and cooked them for two minutes more. All told, it took about eight minutes and while it was easy, the tortillas got a tiny bit over toasted (not that this affected their taste in any way). Next time, I will put them in the oven – or work in cycles of one minute like the recipe instructs! 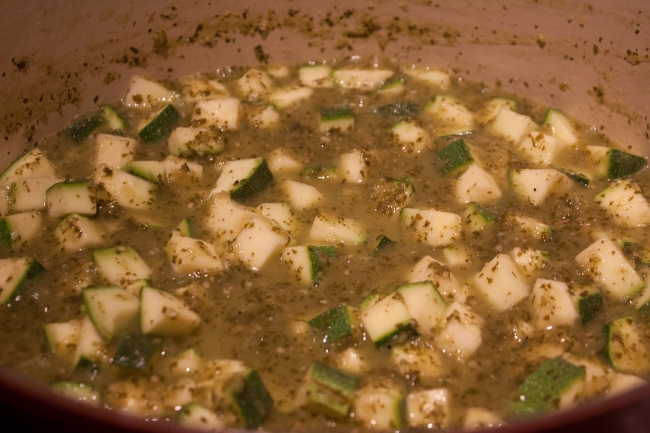 The next to last step was to stir in the shredded, poached chicken and let it warm up, which only took a few minutes. 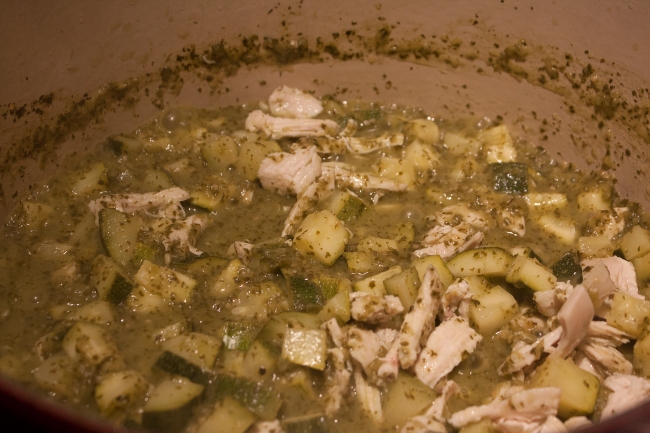 Last but not least, I stirred in the tortilla chips and let them soften a bit.

Kim was in charge of plating and did a beautiful job, garnishing the dish with queso fresco, sliced radishes, and cilantro.

The dish was as delicious as we remembered, with the unique flavor of the tomatillos coming through along with a good bit of heat from the serrano chiles, but not too much. We paired this with a hoppy India Pale Ale, which was a nice counterpoint to the spices in the dish. We made enough to have leftovers and we can’t wait to have them for dinner later this week!

1 Response to September 20, 2014 – Green Chilaquiles with Chicken and Squash