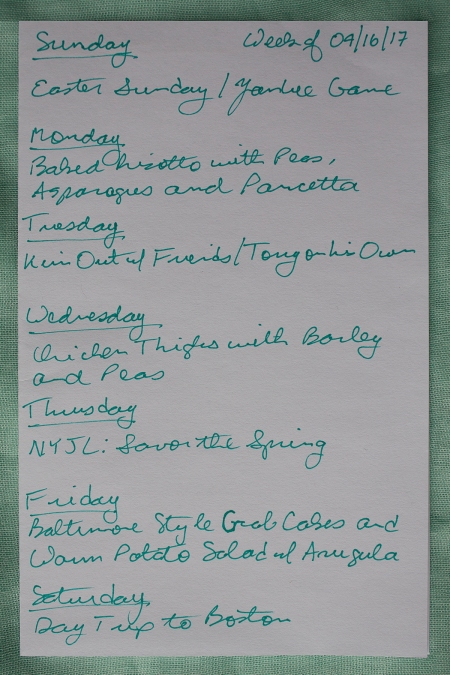 We have a busy few days ahead, with only three dinners planned, but we’re using three (technically four) new recipes, so it should be a fun week of cooking nonetheless.

Sunday is Easter and we will be having lunch with Tony’s family. It will be simple but tasty: sandwiches made with salumi from the local Italian deli. We’ll head home after lunch and gear up for our first Yankee game of the season, against the Cardinals. (Tony has always had an odd fondness for the St. Louis Cardinals, as it is the only non-New York franchise his dad was familiar with, even if dad did call them “Santo Luigi”!) We haven’t decided what sort of snacks well have at the ballgame, but as Tony discovered the Blue Point beer stand on opening day, and since it is right next to the Parm stand, we might have dinner already picked out for us. Tough call though, as the revamped Yankee Stadium menu now features Mightly Quinn’s Barbecue and Bareburger.

Tony will have drinks with his buddies Monday night, but will be home in time for dinner, so Kim will make The Kitchn’s Baked Risotto with Peas, Asparagus, and Pancetta. Kim has made some great risotto over the years, but this new recipes sounds perfect for spring. (Italian food segue: we went to Gennaro’s on Amsterdam Avenue Saturday night. Her quest to find the Upper West Side’s best Linguine and Clams was derailed by Gennaro’s always amazing specials menu, from which she ordered a spectacular seafood risotto, preceded by a fava bean and arugula salad. Tony had cuttlefish and ratatouille over polenta to start, followed by sausages with broccoli rabe.)

Kim will be out with friends on Tuesday night so Tony will be on his own. He will probably have leftovers from our Saturday lunch, which was originally supposed to be our Friday dinner:  Food 52’s Curried Lentils with Coconut Milk. We have plenty of IPAs in the fridge, which will be a perfect pairing for this dish.

On Wednesday night, we plan to make Real Simple’s Chicken Thighs with Barley and Peas. This might be our first time making anything with barley and as luck would have it, it’s not stocked by Fresh Direct. A quick trip to Whole Foods (or more likely our local bodega, which as any good bodega does, seems to stock everything imaginable in a very small space) to get that key ingredient.

Thursday night will find us at the New York Junior League’s second annual Savor the Spring, a fundraiser featuring food and drinks from around New York City. We went last year, when we had things like chipotle pulled pork tacos and Dogfish Head 90-Minute IPA. We’re super excited to attend this year and looking froward to new tastes, especially Cool Haus Ice Cream.

We’ll go a little more summery on Friday night when we make Food & Wine’s Baltimore Style Crab Cakes, which well serve with Food & Wine’s Warm Potato Salad with Arugula. The crab cake recipe is a very simple one: lots of jumbo lump crab meat; saltines and mayo to hold everything together; and some Dijon mustard, Worcestershire sauce, and hot sauce to liven things up.

Dinner on Saturday will probably be very simple–possibly store-bought sandwiches–but eaten in a slightly unusual setting: an Amtrak train. We are planning a day trip to Boston to see a Matisse exhibit at the Museum of Fine Arts, so while we’ll probably have a fancy lunch, the train schedule means we will probably have to have a plain dinner. Well worth it, as we know from past experience, when we took a similar day trip to Boston see a fantastic Goya exhibit at the same museum. It will be a long day, to be sure, but very fun.