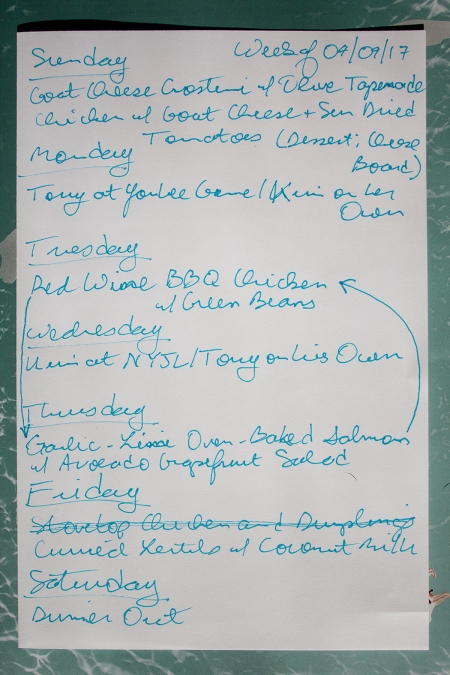 Last week was our super-fun trip to the Catapano Dairy Farm. This week, on Sunday specifically, we’ll be enjoying some of the goat cheese we purchased during our visit. To start, we’ll have Goat Cheese Crostini topped with My Recipe’s Mixed Olive Tapenade. As our main course, we’ll have an old favorite: Ina Garten’s Chicken with Goat Cheese and Sun Dried Tomato. For dessert, we’ll make a cheese, fruit, and nut board featuring Catapano’s Peconic Bel, a semi-firm sheep milk cheese.

We’ll both have nights when we’re on our own this week. Kim will be on her own on Monday, when Tony goes to the Yankees’ home opener with friends he made during a past life as a health care consultant. While Tony will be home in time for dinner, he won’t be hungry after an afternoon’s worth of eating and drinking. Kim will be at a meeting of the New York Junior League on Wednesday, so Tony will visit his mom for dinner.

In between our two nights on our own, we’ll make a dish we enjoyed once before: A Spicy Perspective’s Garlic Lime Oven Baked Salmon. We’ll make a side salad of our own devising of avocado, red grapefruit, and red onion, with a dressing made from special red wine vinegar. What makes it special is that it was made (albeit unintentionally) from a batch of Tony’s dad’s homemade wine. We’re very anxious to try the vinegar, because if it’s good, there are about 4 more gallons of it!

We’ll try a new recipe on Thursday in the form of Food & Wine’s Red Wine BBQ Chicken. We were very confused by one of the ingredients, as we have no idea what “left over” red wine is, but we’ll figure it out. This dish was originally penciled in for Tuesday, but when we decided to make the salmon, it made more sense to have the salmon earlier in the week.

Tony had originally written in another recipe for Friday – Stovetop Chicken and Dumplings – but when Kim pointed out that would mean having chicken three nights in six days, we replaced that recipe with one that Kim found: Food 52’s Curried Lentils with Coconut Milk. We’ve had some good success with Indian-inspired food (like The Kitchn’s 30-Minute Green Curry Braised Salmon) as well as lentils (like Ina Garten’s Salmon with Lentils), so we thought it would be fun to combine the two.

We’ll have dinner out on Saturday night, probably Italian. One of our favorites Italian places on the Upper West Side – Pesce Pasta – closed recently and will reopen as a new restaurant – Il Gusto – sometime soon. In the meantime, Kim is on a quest to find another local place that makes Linguini and Clams that are as good as Pesce Pasta’s were. We’ll let you know what we find!