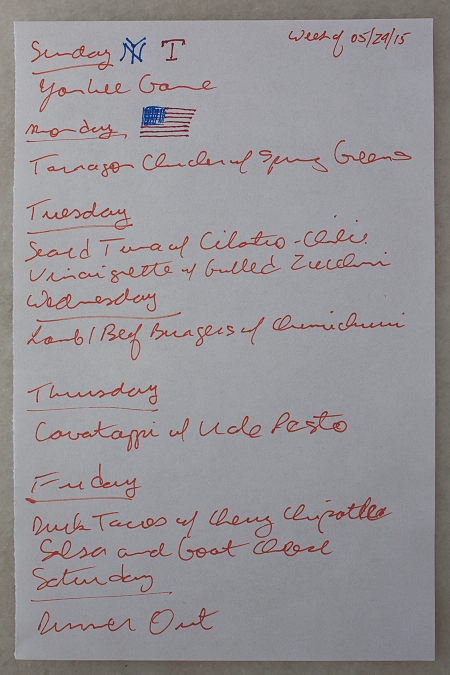 We had an awesome trip to Amsterdam and enjoyed lots of great dinners and lunches. While we enjoyed having other people cook for us, we’re excited to get back to cooking for ourselves. The main theme for this week is cleaning out the freezer and using up the things we’ve frozen over the past couple of months, especially sauces. We thought that would be a good way to ease back into things.

We have tickets to the Yankee game on Sunday night, so no cooking for us. Since Monday is a holiday, we decided to make something new, using one of the ingredients we enjoyed so much in Amsterdam: tarragon.

Tony had two dishes on our trip that featured tarragon in a sauce or dressing. The first was a tarragon butter sauce that accompanied a steak at Brasserie van Baerle and the second was a tarragon vinaigrette used to dress a simple ham sandwich at a bar not far from the Albert Cuyp Market. It never occurred to us to pair tarragon with steak or ham, which is part of why these dishes had such an impact on Tony. He’s going to try to recreate them this week in the form of a roast beef sandwich with tarragon mayo and a ham and cheese sandwich with tarragon mustard. But before then, we’re going to make Food & Wine’s Tarragon Chicken with Spring Greens. We’ve never made anything that featured tarragon so prominently before, so we ‘re very anxious to see what Michael at Wines by the Flask comes up with as a wine pairing.

We have a simple dinner planned for Tuesday night: Seared Tuna with Cilantro-Chili Vinaigrette and Grilled Zucchini. We had the vinaigrette  in the freezer from when we cooked Food & Wine’s Grilled Swordfish with Cilantro-Chili Vinaigrette. We enjoyed this dish when we first made it, as you can read about in this blog post, but since tuna was rated pretty highly on Fresh Direct and on sale to boot, we decided to change things up. We both like our tuna very rare, so the only challenge here will be making sure we sear it very well without over cooking it.

We had some leftover ground beef and ground lamb in the freezer, plus some leftover chimichurri, so we’re having a dish of our own creation on Wednesday: Lamb and Beef Burgers with Chimichurri. We’ll make one burger from each type of meat and share them so we can both try each combination. We’ll have the burgers with a simple salad.

We have another simple dish for Thursday: Cavatappi with Kale Pesto, using the leftover pesto from when we made Rigatoni with Lemony Kale-and-Pecorno Pesto. This will also help us use up the dried pasta from when we made Grown up Mac and Cheese.

Last but not least for this week is Closet Cooking’s Duck Tacos with Cherry Chipotle Salsa and Goat Cheese. We had most of what we need to make it leftover from the last time—namely, the duck and the salsa–in the freezer, but we are mixing things up by using some aged goat cheese that we purchased in Amsterdam.

We’ll have dinner out on Saturday, which should wrap us what looks to be a tasty and easy slate of meals for this week!