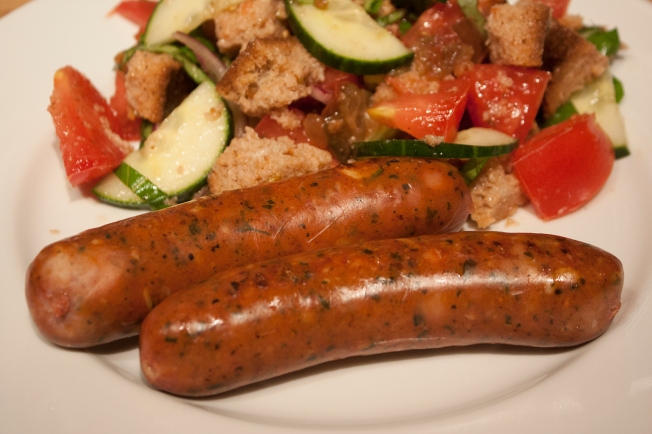 Panzanella on a warm July evening when the tomatoes are really good makes for a wonderful summertime dinner. Here’s how it went when Kim made it on Tuesday night.

I’ve tried many variations on panzanella and have really enjoyed trying different recipes. Sometimes I even combine recipes. This time though, I followed the recipe with one exception—I used heirloom tomatoes. I also made the whole recipe. Surprisingly, leftover panzanella is just as good as the night you make it. Plus, for Tony, the suggestion of one sausage link isn’t quite enough, so that was one more change.! 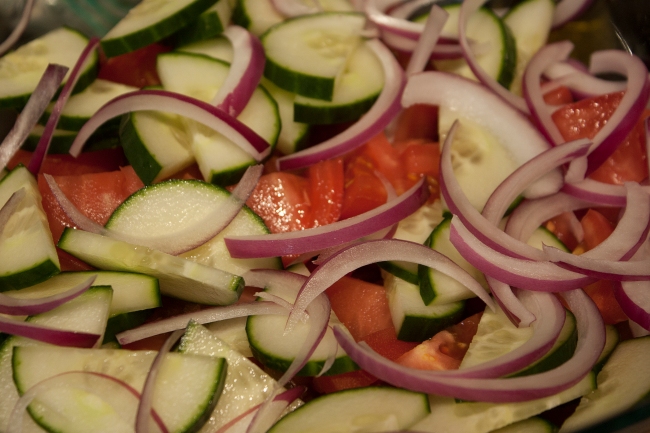 I used a parbaked whole-wheat French break loaf that we baked in the morning while we were getting ready for work. We let it sit out during the day to replicate the effect of day old-bread.

While I probably could have made the panzanella while the sausage was cooking, I made it first so that the bread would have time to soak up some of the dressing. It may have added an extra 10 minutes or so to our wait time for dinner but so worth it! I also found that it needed a little more salt and pepper than the recipe suggested.

Using pre-cooked sausage also moves things along quickly and means the kitchen doesn’t get too hot since we use an indoor grill pan to quickly warm the sausages up.

In just a short amount of time, we sat down to a delicious dinner filled with the tastes of summer. We paired this with our left over Cava from Tapas Night. (We have an awesome Champagne/sparking wine saver!)

We divided the left overs into containers each with half the remaining sausage link and got to enjoy it all again the next day at lunch.