Tonight we made Greek Salad with Oregano-Roasted Salmon, a delicious dish that is perfect for summertime, since it involves very little actual cooking. Tony describes making this fun dinner.

I prepped the salmon as the recipe directed (rub with olive oil, seasons with salt and pepper). As usual we were halving the recipe so we used two, roughly 6 ounce pieces rather than one 1 1/4 pound piece. The recipe also says to set a rack over a baking sheet, arrange the oregano sprigs in the center of the rack, and lay the salmon on the oregano, so I did that to, as you can (sort of) see in the photo below. I wasn’t ready to put the salmon in the over just yet, so I started on the salad and dressing.

Like the salmon, the salad is very easy to prep. We were using a package of baby romaine lettuce, so I just pulled out a few handfuls and then cut up the cucumber and onion. (I forgot about the tomatoes. This was bad. Do not forget about the tomatoes). This all took maybe 10 minutes, as did making the dressing, which is part of what makes this recipe great – minimal prep, minimal time with the oven on.

Once the salad and the dressing were ready, I put the salmon in the oven. We tend to like our salmon closer to the rare end of the spectrum than the well-done end and since it was going into a 450 degree oven, I erred on the side of caution. In fact, I erred way on the side of caution and only left the fish in the oven for 10 minutes, rather than the 12 minutes the recipe suggests as a minimum. The fish looked fine when it came out of the oven (as you can see below), but was a little underdone in the middle. This wasn’t a big issue for us – like I said, we like our salmon closer to rare, but I next time I’ll aim for 12 minutes! 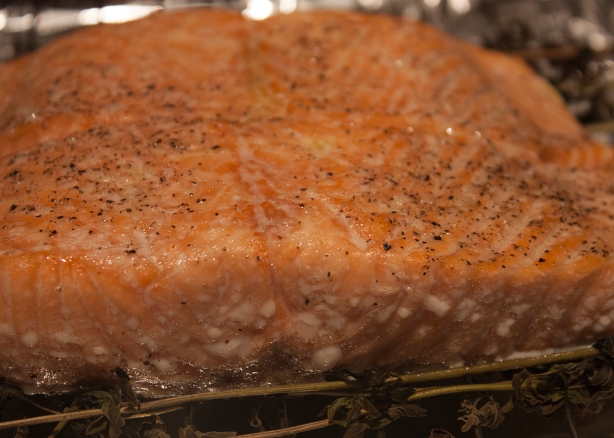 This dish is intensely flavorful as the dressing and olives and feta really pack a (tasty) punch, but don’t overwhelm either the salmon or the salad. We paired this with up with an Italian white wine (San Quirico Vernaccia di San Gimignano), which was perfect match, and we enjoyed a lovely dinner.