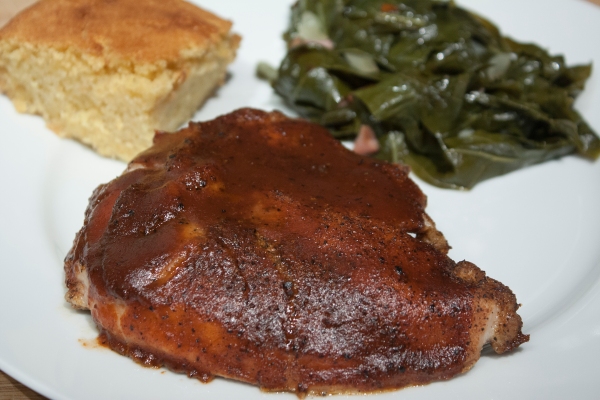 Tonight we made one of our favorite dinners, Barbecued Chicken with Short-Cut Collard Greens. This is probably the only dinner we make where every part of the meal is made using a short-cut: the chicken is “barbecued” in the oven, the collard-greens are cooked (at least partly) in the microwave, and the cornbread is (sometimes) bought pre-made. If it was a weekend, we would have made our own cornbread, but we’ve never made the collard greens any other way. Short of finding a way to hang a grill on the window ledge, we’ll also be barbecuing our chicken in the oven for the foreseeable future!

This timing of this recipe also works out really well. The cornbread is in the oven just long enough to season the chicken, do all the prep work for the collard greens, and clean up. The chicken and collar greens both take about the same amount of time to cook (45 minutes), so if you start then at the same time, they should be done at the same time.

The first thing I do is season the chicken. For this recipe, we always use bone-in chicken breast with the skin on. Using this cut means the chicken will take a good bit longer to cook than boneless chicken breasts, but we think they come out juicier and more flavorful, so we never do it any other way. I sprinkle the bone side and the skin side of the breast with lots of Salt Lick dry rub. Salt Lick (www.saltlickbbq.com) if you don’t know, is a phenomenal barbecue spot in Driftwood, Texas, just outside of the state capital of Austin. (There is also a location in Austin.) It is absolutely worth a visit if you’re in the area, which I would define as anywhere within 100 miles! 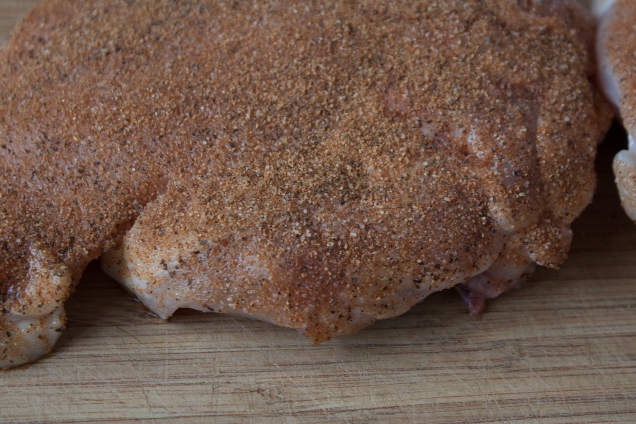 The next step is to prepare the collard greens. The giant leaves in the photo below may look a little intimidating, but I’ve figured out a few short cuts to make them much easier to work with. 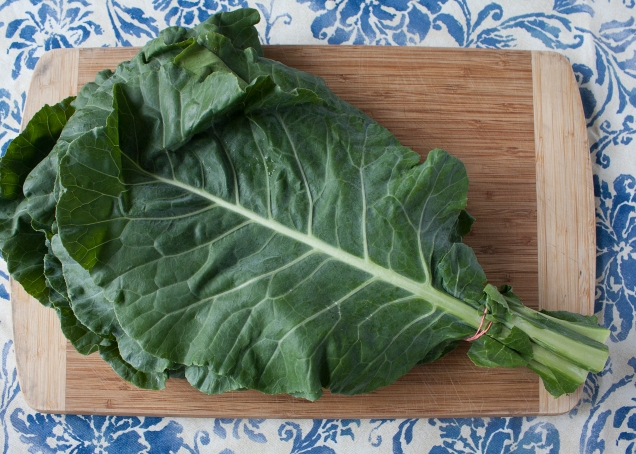 The greens usually come tied together with a rubber band, so I leave that on and cut off the very bottom part of the stems, like so: 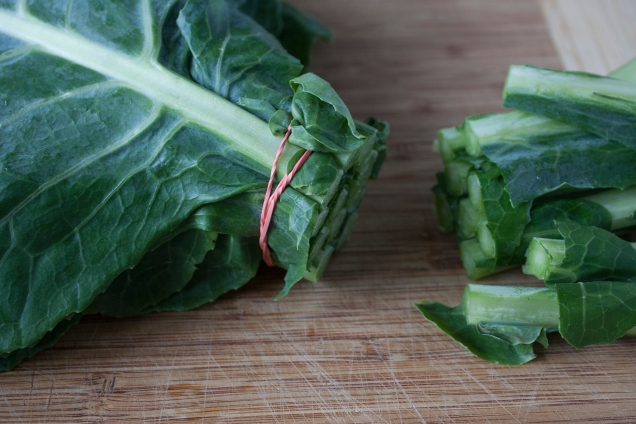 Next, I remove the rest of the stem. I take one leaf at a time and fold it in half (it’s fine if it “snaps” when you do this) to expose the stem. I then run a knife down the inside edge of the stem. 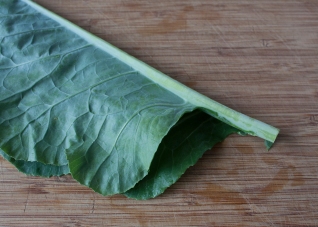 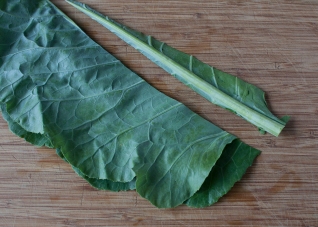 I do this in a way that doesn’t cut the leaf in half, just because I find it easier to do it that way. It’s a pretty simple thing to open the leaf back up and cut it in half. 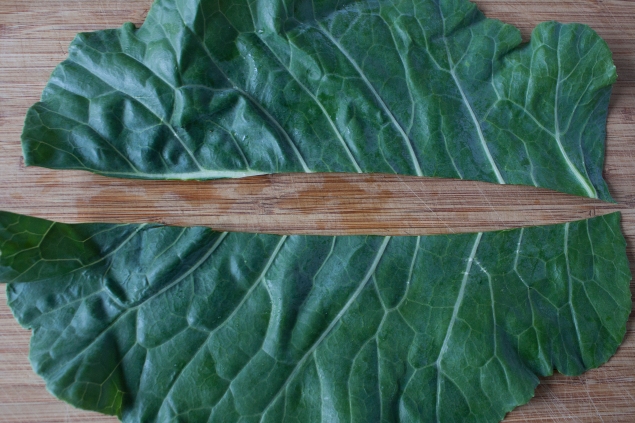 Once I have all the leaves de-stemmed and cut in half, I stack the halves up and cut them crosswise into 1/2 inch strips. (The photos below just shows one leaf, but you get the idea.) By stacking the leaves, you can get through this step in no time at all. 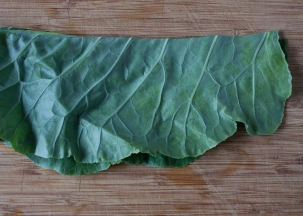 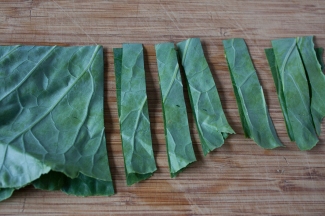 I also know a great short cut for dicing onions, that I learned watching a cooking show (Alton Brown’s “Good Eats”, I think). First, I cut the onion in half lengthwise so that there’s a bit of stem at the bottom of each half. I cut a little bit off the top, peel the onion, and lay it cut side down on the cutting board. 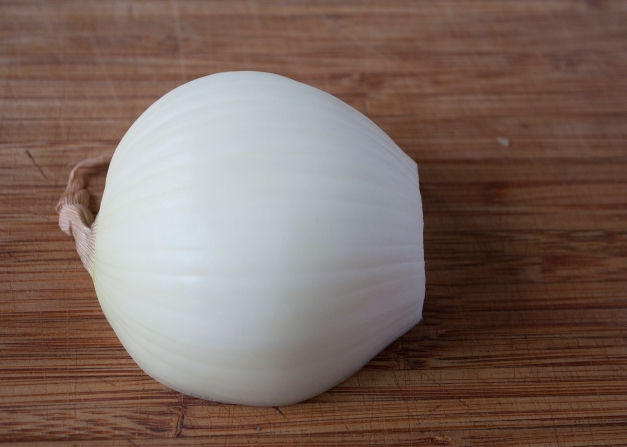 Next I made several cuts, starting near the stem and moving out toward the top, like so: 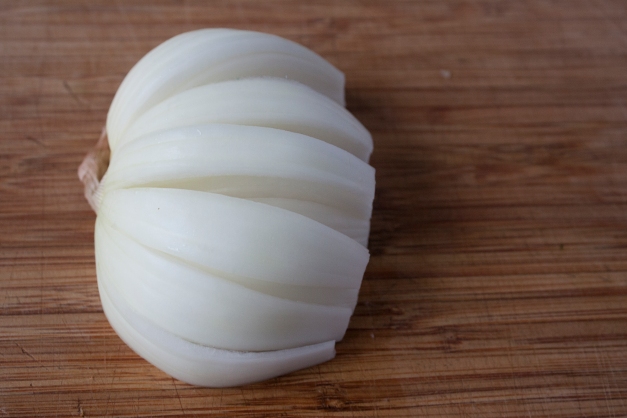 The last step is very easy, as I just cut across the other cuts. The result is nice, even pieces, without much work at all.

The cooking steps are very simple. First, I put the collard greens in large bowl with a little water, covered the bowl with plastic wrap, and microwaved for 5 minutes. (This is the step that really speeds up the process.). Once that was done, I sautéed the onions for a couple of minutes, added the remaining ingredients, covered the pot, and let things simmer for about 30 minutes. At the same time that I put the greens in the microwave, I put the chicken in a 350 degree oven. I checked the temperature with a meat thermometer after about 20 minutes and put the chicken back in, as it needed more time. After another 10 minutes, I checked the chicken again and it was right at 160 degrees. I slathered both pieces with Stubb’s barbecue sauce (Stubb’s – www.stubbsaustin.com – is another great barbecue spot in Austin) and put them back in the oven for 5 more minutes, just to warm up the sauce.

So there you have it. A few short cuts, minimal cooking, and another fun dinner for Two at the Table!