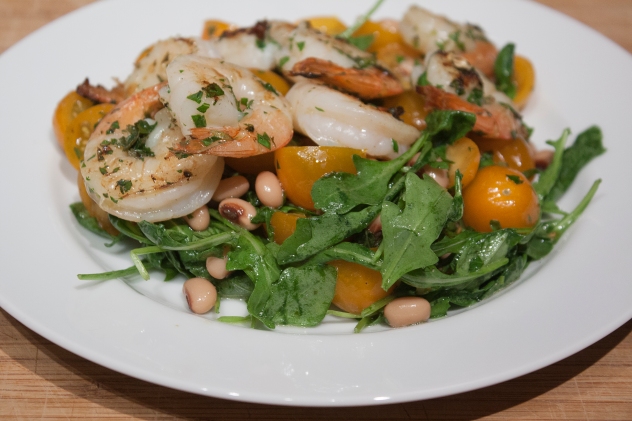 Tuesday night, we made a new recipe that we received via e-mail from “Food & Wine” magazine: Grilled Shrimp with Black-Eyed Peas and Chimichurri. We’ve made chimichurri before, but with steak, so this is a new twist for us. Also, we were excited to eat black eyed peas, which we only do on New Year’s Day. This is a Southern tradition that’s supposed to bring good luck and that Kim introduced Tony to right before they were married. Here’s how the dish came together:

This was a very easy recipe that took maybe 45 minutes from start to finish. Since most of that time was spent marinating the shrimp, it’s not a very labor intensive dish.

The first step was to make the chimichurri. As we mentioned, we’ve made it before, but this recipe has a unique twist. It uses parsley, olive oil, lemon juice, and garlic, just like about all of the recipes we’ve seen before, but it also uses fresh oregano, which was a very interesting change. Fresh oregano smells and tastes much more vibrant than the dried version. It has small, round leaves that extend out from a thin, woody stem, so all you need to do is pinch the top of the stem and run your thumb and forefinger down to free the leaves. Since we were halving the shrimp, I also halved the chimichurri, which in retrospect was a phenomenally bad idea. Why? After marinating the shrimp and dressing the salad, there was nothing left over! It would have been nice to have more to pour over the shrimp or even to spice up a sandwich later in the week. 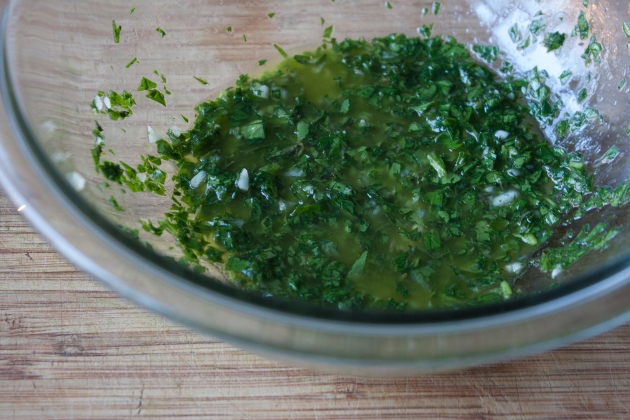 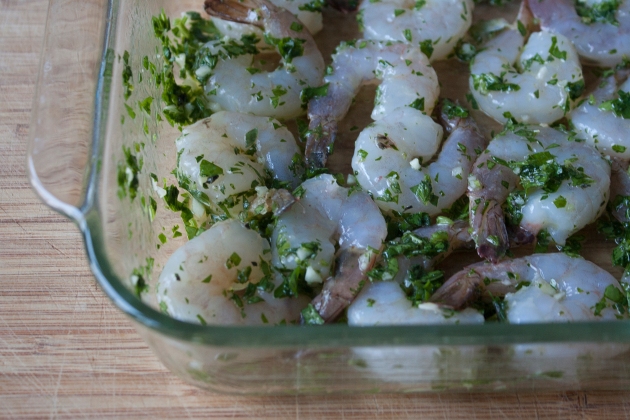 While the shrimp was marinating, I made the salad. I simply combined a 15-ounce can of black eyed peas, the arugula, and the cherry tomatoes. I waited until the shrimp was almost done cooking before adding the dressing to the salad, because I didn’t want it to get too soggy. 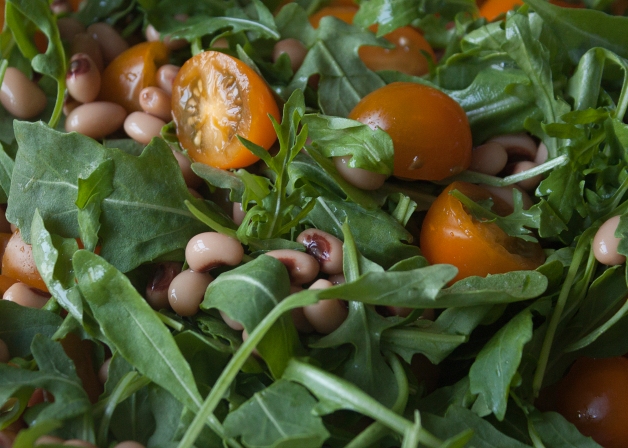 The final step was to cook the shrimp, which took about 2 minutes per side on the grill pan, which I had over medium-high heat.

This new version of chimichurri was a winner. The oregano really stood out and was a nice complement to both the shrimp and the salad. Much like the potatoes that were included in Sunday night’s blue fish recipe, the beans made the salad more filling but not heavy. We paired this with a white wine for a quick, different, and delicious dinner.

1 Response to July 7, 2014 – Grilled Shrimp with Black-Eyed Peas and Chimichurri