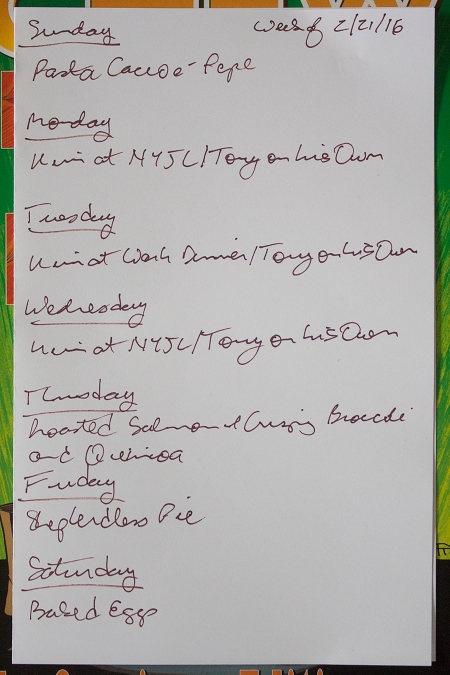 We were very good last week about sticking to our “no meats, no sweets, no snacks, no quacks” rule for Lent, but we did take on pass on making two dinners, ordering in Indian one night and going out for Italian another. Since we already have the ingredients, we’re going to “recycle” those two recipes and make them this week.

The first recycled recipe will be Ina Garten’s Pasta with Pecorino and Pepper (Pasta Cacio e Pepe), which we’ll make Sunday night. We’ll be visiting our friends Frank and Danielle and their two beautiful little girls Sunday afternoon and went to spend as much time with them as possible, so a quick, easy dinner will be perfect when we get home.

Tony will be on his own Monday, Tuesday, and Wednesday. He’ll have some leftover pasta on one of those nights and probably the leftover Indian take out on another, but he’ll have one more dinner to figure out.

On Thursday night, well make a dish we had a few weeks ago: Real Simple’s Roasted Salmon  with Crispy Broccoli and Quinoa. We enjoyed so much when we first made it that we knew it was going to come up again on one of our Lent menus. We’ll pair this dish with a 2014 Chateau Haut Selve Graves suggested by our friend Michael at Columbus Wine and Spirits.

On Friday night, we’ll make something new and a little more challenging, but not too difficult: Rachel Khoo’s Shepherdless Pie. This dish puts a spin on a traditional shepherd’s pie by replacing meat with lentils, which we have left over from when we made the Salmon with Lentils a few weeks ago, so it’s a perfect fit for a Lent menu. Plus, it’s topped with polenta instead of mashed potatoes, which should be an interesting twist. We’ll enjoy this with a bottle of 2012 Charisma Shiraz Petit Verdot Sangiovese, also courtesy of Michael.

Last but not least, on Saturday night, we’ll make the Food & Wine’s Baked Eggs with Spinach, Asparagus, and (NOT) Prosciutto that we planned to make last week. We’ll have this with a salad and a 2011 La Damnee Des Prieur Sancerre for a nice dinner before heading out to the ballet.