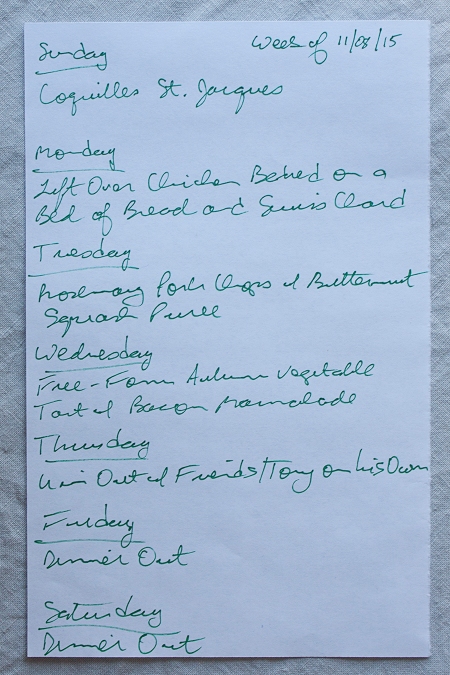 We have a pretty busy end to the week – we have plans with friends Thursday, Friday, and Saturday nights – so we’re front-loading the menu this week and making some fun things between Sunday and Wednesday.

On Sunday night, we’ll have Ina Garten’s Coquilles St.-Jacques. Even thought this recipe is designed to be made ahead, we’ll probably just prep it in the afternoon and cook it in the evening. We’ve written about this dish on the blog before and when we saw that scallops were featured on Fresh Direct, we decided to make it again.

On Monday night, we’ll have left overs, namely, the Chicken Baked on a Bed of Bread and Swiss Chard that we had Friday night. We thoroughly enjoyed it for dinner Friday night – Tony may have finally overcome his dislike of capers, which are featured in the recipe – and are looking forward to having it again on Tuesday.

On Tuesday, we’ll have a dish we planned to make last week, Rosemary Pork Chops with Butternut Squash Puree, but didn’t quite get around to making. We have all the ingredients already, so this one should  be pretty quick and easy.

We’re making something entirely new on Wednesday night: Food & Wine’s Free-From Autumn Vegetable Tart with Bacon Marmalade. We’ve had a lot of success with tarts in the past, from the Hip Foodie Mom’s savory Onion, Mushroom and Thyme Tart to Jacques Pépin’s sweet Country Apple Galette, which we featured during our Frocal (French-inspired, locally-sourced) Thanksgiving last year, so this one should be right up our alley. The one thing we will note is that this recipe is VERY involved for a weeknight. The estimated total time for making this dish (prep plus cooking) is 2 hours and 15 minutes; as with most dishes we make for the first time, we’re going to  assume it will take a little longer. So, we’re going to do most of the hard work, like making the bacon marmalade, prepping the veggies (which should keep until Wednesday), and making (and then freezing) the dough, Sunday afternoon. We’ll make the tart Wednesday night and probably have enough left over for at least a couple of lunches later in the week.