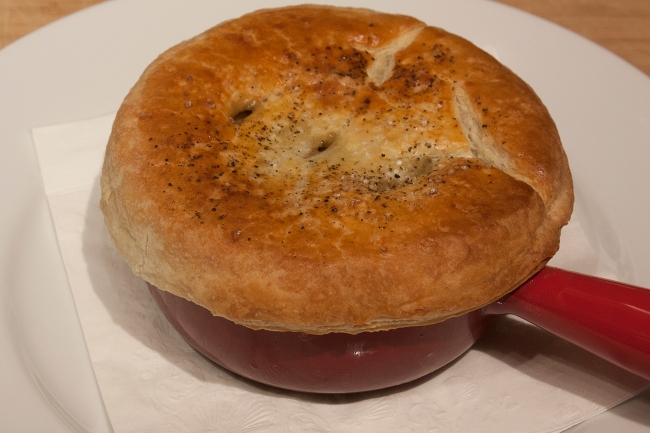 On Wednesday night, Tony made Ina Garten’s French Chicken Pot Pies from her “Make it Ahead” cookbook. He assembled the pies in the late afternoon, which meant all he had to do right before Kim got home was to put them in the oven. Here, he explains what he did:

I’ll start by saying this is not a typical weeknight dinner, though, to be fair, the recipe never claims that it is. I was able to pull it off because I was home all day, but when we make these again (and we will!), it will either be on a weekend, or possibly on a Monday night, if we’re able to do the prep and assembly on a Sunday. The recipe doesn’t say the maximum amount of time you can leave the pies in the fridge before cooking; it only says a minimum of 30 minutes. Keeping in mind that raw eggs are used to “glue” the puff pastry to the rim of the bowl and to brush the top of the pie, I would be comfortable letting these sit in the fridge for 24 hours before cooking them.

The first step was to cook the chicken breasts. Since I was cutting the recipe in half, I used two, bone-in, skin-on breasts, which I patted dry with paper towels, brushed with olive oil, and sprinkled generously with salt and pepper. I cooked the breasts in a 350 degree oven for 35 minutes, during which time I worked on the rest of the filling.

There was a bit of prep work involved, but since I was cutting the recipe by 1/3 (the full recipe makes six pies), I did have to do some careful measuring and weighing. The last thing I wanted was to overfill the bowls, which would have made for some very messy pies with soggy crusts, or worse, under-fill them, which would have made for a less than satisfying dinner. Fortunately, the recipe translates all of the very general measurements (such as 4 leeks and 5 carrots) into cups, which made the math much easier to do. So, instead of 4 cups of chopped leeks, I prepared 1 and 1/3 cups and instead of 2 cups of carrots, I prepared 2/3 of a cup. For the mushrooms, rather than try to figure out what 1/3 of 8 ounces was, I converted to metric (What can I say? I am a math nerd at heart!) and measured out exactly 76 grams of mushrooms. If you don’t have a scale, can’t work with metric units, or aren’t neurotic, you can just use half of an 8 ounce package of mushrooms. I also measured out 1/6 of a cup of flour simply by filling our 1/3-cup measuring cup half-way. I was a little more generous with the garlic and tarragon, as I figured going heavy here would add more flavor without causing the bowls to overflow. I cut those measurement in half, mincing up 2 teaspoons of garlic and 1/8 of a cup (or one-half of a 1/4 cup) of fresh tarragon leaves. Last but not least, I measured out 95 grams of frozen peas. As usual, I figured I would measure and add the liquid ingredients as I went along. 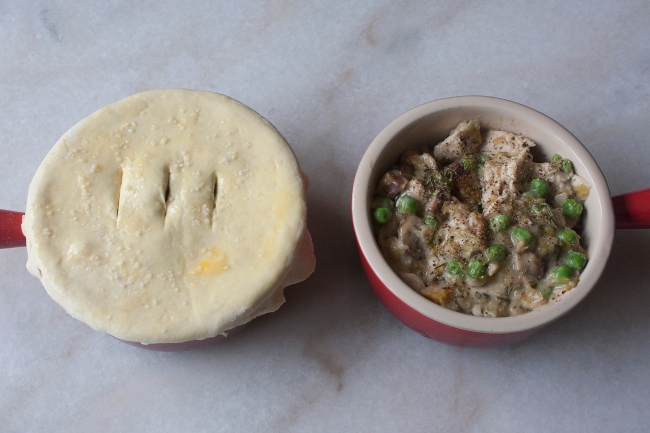 I next sautéed the leeks and carrots in butter over medium-high heat for about 10 minutes. I then added the garlic, mushrooms, and tarragon and cooked everything for 5 minutes more. I very carefully sprinkled in the flour – I wanted to avoid just dumping it in, which would have created clumps – and cooked the ingredients for another half a minute or so.

I then added about 6.5 ounces of chicken stock, or 1/3 of the 20 ounces called for in the recipe. Rather than buying bottle of cream sherry just to use in this recipe, I substituted white wine and added two tablespoons to the pot. Because I was using a pretty large pot without much liquid in it, I never really got to the “boil” stage; the mixture simmered for a few minutes and then reached what I fought was the right level of thickness. I added the heavy cream (a little over an ounce), plus some salt and pepper, and let everything simmer for five minutes more.

By this time, the chicken had come out of the oven and rested for a few minutes, but wasn’t quite cool enough to work with. Even though I had taken the pot off the heat, I didn’t want to let the rest of the filling get dried out, so I just cut up the still-hot chicken until I had about 1 and 2/3 cups. (The breasts were large, so I had most of a piece left over when I was done.) As you may know, a big part of the reason for letting meat rest before you cut it is to let it reabsorb its juices; cutting meat when it’s hot lets all that flavor escape. To solve for this, when I added the chicken to the pot, I also poured in the juices that were still on the cutting board. I then added the peas and stirred everything together.

I then started to work on the puff pastry. I found two plates that were a little bigger than the edges of the bowls I was going to use for the pies. I rolled out the pastry dough, which I had let defrost, until it was large enough to accommodate the two plates. I laid the plates down on the pastry and using a sharp paring knife, I cut around the edges until I had two circles about 6 1/2 inches across.

Now, I was in the home stretch. I filled the two bowls with the chicken and veggies; all my careful math paid off as the bowls were filled perfectly. I beat one egg with a tablespoon of water and used that to brush the top of the bowls. I carefully laid the pastry dough on the bowls and just as carefully pressed it down and around the top of each bowl. I brushed the top of each pie with the egg wash, sprinkled on some fleur de del and fresh ground black pepper, and cut three one-inch slits in the top of each pie. I then put the pies in the fridge, where they rested for about 2 hours.

Right before Kim got home, I put the bowls on a parchment-paper-lined baking pan and slid the pan into a 400 degree oven, where the pies baked for about 35 minutes. 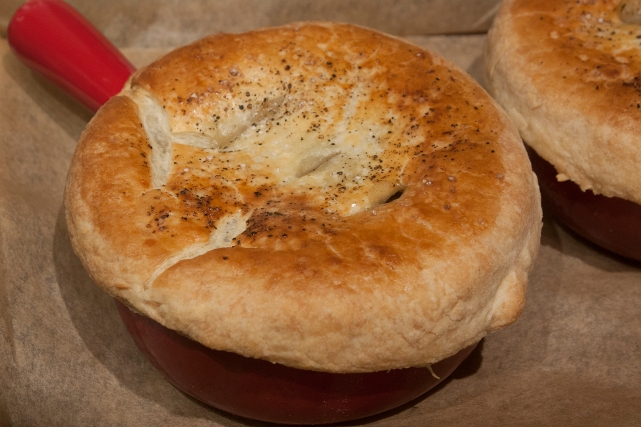 The pies came out perfectly: the tops were golden brown and the filling was hot and bubbly. The pies were not overfilled and the crust was crunch on top and soft without being soggy underneath. While the filling could have used a little more salt and pepper, the tarragon came through very clearly and gave a classic recipe an interesting twist. We paired up the pies with a very hoppy Sierra Nevada Hop Hunter IPA. Kim was so kind as to say that the pies were better than the ones we get from Harriet’s Kitchen, a local restaurant known for, among other things, its chicken pot pies. We haven’t given up on Harriet’s, but we are definitely making this dish again!