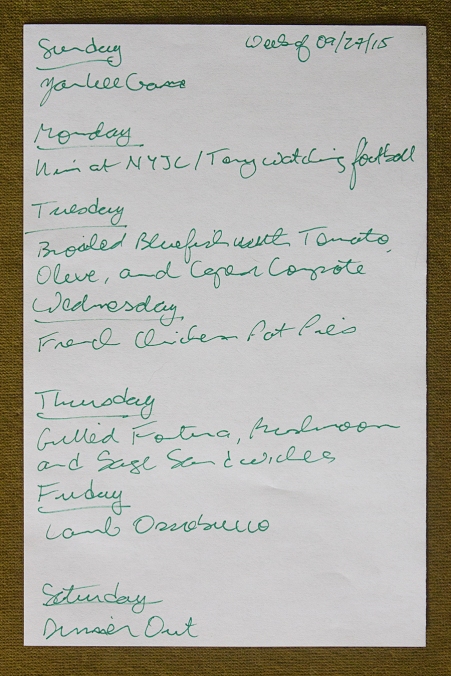 We’ve been on a bit of an unplanned hiatus for the past several weeks and while we’ve been cooking like we always do and making lots of fun recipes, we haven’t had time to post our menus or write up the dishes. Things have settled down a bit, so we’re going to try to get back on track, starting this week. Tony will be home (he’s taking a little staycation as he gets ready to start a new job next week), so he’ll have time to make several new dishes – and take lots of great photos!

On Sunday, we’re going to Yankee Stadium with our friends Rachel and John for our last regular season game this year. We’ll have our fill of ballpark food, so dinner Sunday night will probably be cheese and crackers, if we’re hungry at all.

On Monday night, Kim will be at a New York Junior League meeting, so Tony will be on his own. He’s getting together with his friends Lynee and Peter, two ardent Green Bay Packers fans, to watch Monday Night Football.

We’ll be making another new recipe on Wednesday night: Ina Garten’s French Chicken Pot Pies. (Please note that the link will take you to the Food Republic website, where you can find the recipe.) We’re going to pair this up with a 2012 Audebert & Fils Saint Nicolas de Bourgueil, a Cabernet Franc, also suggested by Michael.

On Thursday, we’ll be making a Food & Wine recipe that we have made before and posted to the blog: Grilled Fontina, Mushroom, and Sage Sandwiches . We’re going to put a bit of a spin on this by drizzling truffle oil in on the sandwiches. Rather than pairing this up with a wine, we’re going to pair it up with a hoppy IPA.

On Friday night, we’re going to do something a bit extravagant and make Giada DeLaurentis’ Lamb Osso Bucco. This isn’t a very complicated dish, but it does take several hours to make, so he’ll probably start it in the late afternoon so it will be ready when Kim gets home from work. We’ll pair this up with a Pietro Rinaldi Barbaresco, which was a very generous and thoughtful going away gift from Tony’s boss.

We’re having dinner out on Saturday night – a few beers at West End Hall, a new beer hall on the Upper West Side, followed by dinner at Lolo’s Seafood Shack, so we won’t be doing any cooking.

That’s it for this week. Please check in as the week goes in to see how each dish went!