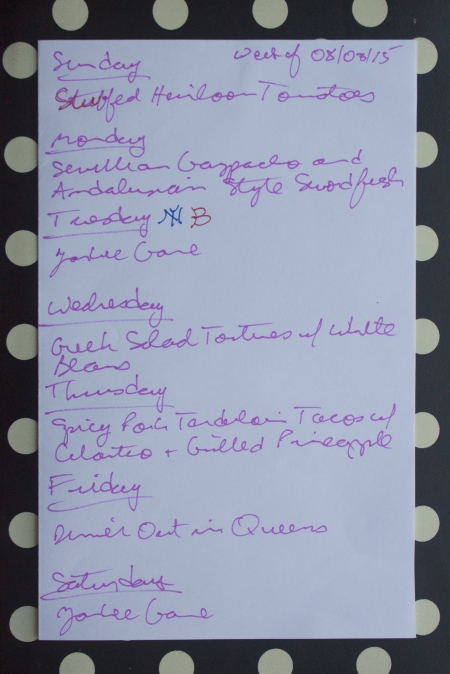 We have a busy baseball schedule this week, with a game on Tuesday night with our friends Alexandra and Eric and a game Saturday afternoon with our friends Marie and Jeff. We’ll have dinner at the ballpark on Tuesday night and, if the past is any guide, we won’t be all that hungry for dinner Saturday night. We’ll have another Queens adventure planned for Friday night, during which we’ll hit a Brazilian restaurant called Pao de Quiejo. Even with our busy schedule, we still have four fun recipes planned for this week.

On Sunday night, we’ll be having Stuffed Heirloom Tomatoes, a recipe we found in “In Style” magazine. Heirloom tomatoes are pretty much at their peak right now and this recipe stuffs them with tasty things like couscous, chanterelle mushrooms, and tzatziki. We’ll be pairing this with a 2012 Trimbach Gewürztraminer suggested to us by Michael at Wines by the Flask.

Monday night’s dinner is going to be completed in two parts. We read a great article in the New York Times about Sevillian Gazpacho, which, in southern Spain is not eaten as a soup, but enjoyed as an ice-cold drink.  We thought it would be fun to make and as the recipe says the soup needs to be chilled at least 6 hours or overnight, we decided to make this on Sunday night and enjoy it before dinner on Monday.  The main course on Monday will be Andalusian-Style Swordfish. We picked this recipe because swordfish was rated very highly on Fresh Direct and because we wanted something that would pair well with the gazpacho. We’ll have this with a 2013 Domaine de la Pinardiere Muscadet.

Our last Queens adventure took us to a Greek restaurant in the Ditmars neighborhood. Kim was so inspired by our dinner that she found a recipe for Greek Salad Tartines with White Beans. We’ll have this on Wednesday night with a 2013 Quinta da Lixa’s Aromas das Castas from Portugal.

Thursday night will be a recipe of our own invention: Spicy Pork Tenderloin Tacos with Cilantro and Grilled Pineapple. We’re going to start with one of our favorite recipes, Chili-Glazed Pork, and use that as the basis for the tacos. We’ll pair this with a nice, cold, hoppy India Pale Ale.