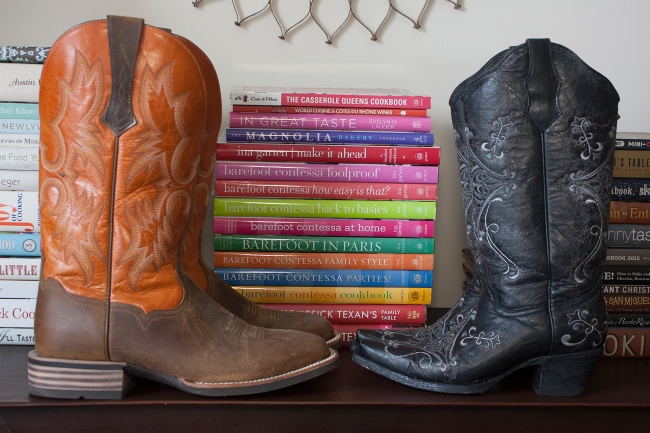 Things have been a little hectic the past few weeks, but we’ve managed to make some fun new dishes, like Food & Wine’s Shrimp and Asparagus Risotto and Corn and Black Bean Tortilla Tart from the Hip Foodie Mom blog. This week, however, is going to be a quiet week for cooking for Two at the Table, because we have so many fun things planned.

We’re going to the Yankee game with our friends Chris and Susanne on Sunday and will probably grab dinner together afterwards.

Kim will be out both Monday and Tuesday nights, so Tony will be on his own. He managed to score some leftovers from his mom: her sauce (with meatballs and sausage) and some pasta, so he’ll enjoy that on the nights when Kim is out. He’s thinking (more like dreaming) about a meatball sub on Monday night and a great, big helping of mom’s pasta on Tuesday night.

We will do some cooking Wednesday night: the Grilled Cheese Sandwiches with Truffle Oil that we planned to have last week, but that got bumped when we found ourselves in Flushing, Queens and decided that we had to have Chinese food. We did, and it was awesome. The restaurant was called Kung Fu Xiao Long Bao and it specializes in dumplings. We had the steamed crab and pork buns, the pork vegetable wontons in spicy sauce, the scallion pancake, and the Shanghai noodles. Everything was spectacular, especially the pork vegetable wontons, which were just the right amount of spicy and came with a thick, delicious sesame sauce. (We debated whether it was peanut, but decided it was sesame.) The stars of the show, as you can imagine, were the buns. They were not only filled with meat, but also a delicate broth, which explains why one reviewer on Trip Advisor called them (in a positive way) “soupy dumplings.” We were the only non-locals in the place, so we watched how everyone else was eating them: putting them in a spoon, biting off the tops, sucking out the broth, and then eating the dumpling. There was something vaguely vampirish about it all, but it did seem like the best way to enjoy each component of the dumpling.  We ate them the “wrong” way (we just gobbled them up, soup and all, before we realized there was a technique to it), so we’re trying to figure out an excuse to find ourselves in Flushing again so we can go back and get it right!

We’re going to be in Nashville for a wedding from Friday through Sunday, so we won’t be doing any cooking those days. We have a very early flight on Friday morning, so we’ll probably order in on Thursday so that we have more time to pack for our flight. We’re going to try several restaurants in Nashville and are excited to visit them all. A trip to the South without barbecue seems like a wasted trip to us, so we’re having lunch on Friday at Edley’s Bar-B-Que. Dinner on Friday will be at Husk, where Chef Sean Brock has a rule that we’re happy to abide by: “If it doesn’t come from the South, it’s not coming through the door.” The menu looks great and should provide plenty of fuel for the honky-tonking we plan to do Friday night! (We’ve been told on good authority that it’s a bit too hot in Nashville in July for cowboy boots, but we’re wearing them anyway!) Since the wedding isn’t until 3:30 p.m., we’re going to have time for brunch/lunch, so we’re visiting The Southern. We’re both drooling over the Southern Burger, which comes with jalapeno bacon, pimento cheese, and fried onions. Our flight on Sunday isn’t until 4:00 p.m., so we’re going to explore the 12 South neighborhood, which is home to lots of funky shops. It should be a nice way to wrap up what looks to be a fun weekend!