For our wine pairing dinner with Wines by the Flask, Kim was inspired by their suggestions based on classic pairings for Sauvignon Blanc, which Eric told us not only include simple salads or seafood but also include oily fish (like sardines or mackerel), sharp cheeses, risottos, artichokes, as well as dishes that are lightly breaded like crab cakes, spinach tarts, or seafood crepes.

For the menu, Kim planned Rachel Khoo’s Sun-Dried Tomato and Ricotta Tapenade, Ina Garten’s Spinach in Puff Pastry, Food 52’s Cilantro Lime Salmon Cakes with Chipotle Mayo and a simple green salad with a lemon-Dijon vinaigrette. (Please note that the first two links will take you to Rachel and Ina’s websites, while the third will take you to the recipe for the salmon cakes.) Kim describes how she prepared all the dishes so that everything would be ready at the same time for the podcast. 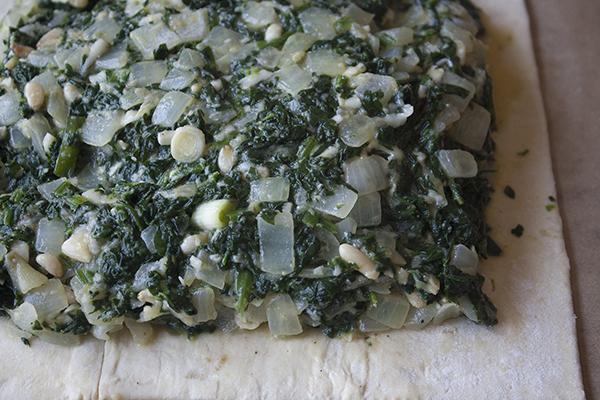 We had all the groceries delivered Saturday morning so that I would have time on both Saturday and Sunday to prep.  I started by making the tapenade, since I knew that giving it  a chance to sit over night would only make the flavors blend more thoroughy. Plus, it was the only dish I was using a food processor for, so I could get that out and then put it away, freeing up counter space for the next dish. (Got to love a small NYC kitchen!)

For the tapenade, we used the same Coach Farm Goat Cheese Ricotta as the last time we made it, which I think gives the tapenade a nice, tangy flavor.  The tapenade is so easy to make, with everything (ricotta, sun dried tomatoes, capers, lemon juice and parsley) going right into the bowl of the food processor. A few pulses of the food processor and a few grinds of pepper and the tapenade was made. I put it into two small mason jars that I thought would look cute for serving. Best of all, we had just a bit left over to try it on Saturday night before our Valentine’s Day dinner.

To be ready for more intensive prep on Sunday, I put the frozen spinach and puff pastry (or so I thought;  more on this later) into the fridge after dinner to defrost overnight. Dinner was not going to be until about 8:30 p.m., so I had time on Sunday to prep for the salmon cakes and spinach in puff pastry. I knew that having everything prepped in advance as much as possible would make it much easier to get everything on the table at the same time.

On Sunday, I started by roasting the salmon for the salmon cakes as that could easily go into the oven while I worked on items for the spinach in puff pastry. While the salmon was roasting for 12 minutes, I started making the spinach mixture by squeezing out the water from the now-defrosted spinach and chopping the onion, scallions, and garlic as well as toasting the pine nuts. Tony was a big help, grating the Parmesan and Gruyère while I was sautéing the onions. They took a little longer to cook than the five to seven minutes the recipe stated but I think I might have used a bit more than called for in the recipe. (I think next time I would measure more carefully and possibly cut down on the onion so that the spinach flavor could come through.) I added in the garlic for the last minute of cooking. Once the onion/garlic mixture was ready and cooled just a little bit it could be added to the spinach, scallions, cheese, egg, bread crumb mixture.

I had everything ready to go and then realized I never actually put the puff pastry into the refrigerator to thaw! I looked at the directions that noted it could be left out at room temperature for 40 minutes, which worked just fine. Once thawed, I put the spinach mixture on the first sheet of pasty, leaving a one inch border as suggested in the recipe, and brushed it with egg wash. I then rolled out the second sheet to be about an inch bigger all the way around than the first sheet and pressed it into place, sealing the edges by crimping the dough with the tines of a fork. I then cut three slits into the top, brushed it with the egg wash, and finished by sprinkling with salt and pepper. Into the refrigerator it went to be baked later, timed to come out at about our 8:30 p.m. start time.

I then turned my attention to prepping the salmon cakes, I first diced the red onion and red pepper and the chopped the cilantro. By this point, the salmon was cooled and easily broke into nice flakes to be mixed with the veggies, breadcrumbs, mayo, and egg. I then shaped the mixture into eight patties and put them into the fridge on a plate covered with plastic wrap. I decided that dipping them in breadcrumbs right before cooking made more sense than doing that step in advance and I knew would only take a few moments. Meanwhile, Tony made the chipotle mayo, first by grinding some chipotle flakes into powder and then mixing it with the mayo with just a touch of salt.

The last item I wanted to make in advance was the salad dressing, which was a simple vinaigrette of freshly squeezed lemon juice from one lemon, about a teaspoon of Dijon mustard, olive oil, salt, and pepper. I specifically picked lemon as the acid in the dressing as I thought it would be a nicer and brighter pairing with the wine than vinegar.

And with that, the prep was done and we could relax for a few hours and focus on other details like setting the table with many, many wine glasses.

At about 7:30 p.m., I started to preheat the oven to 375 degrees so that I could put the spinach in puff pastry in a few minutes before 8:00 p.m. so that it would come out at about 8:30 p.m. Since it had been in the refrigerator, I knew the cooking time would be closer to the 40 minutes suggested in the recipe . It was a great decision timing-wise and when the Wines by the Flask team of Michael, Eric and Eric’s girlfriend, Manon arrived, the apartment already was filled with the delicious smell of the spinach in puff pastry. I also got out the tapenade so that it would not be so cold when we ate it, thus allowing the flavors to come through a bit more.

As Michael and Eric set up the equipment for the recording, I dipped the salmon cakes into the bread crumbs cooked them, which I knew from past experience took a little longer than the 2 minutes per side that the recipe suggested. Manon was a huge help as I plated the salmon cakes and salad just as the spinach in puff pastry was coming out of the oven. I then cut the spinach in puff pastry into squares and we were ready to start pouring wine and start the recording for the podcast.