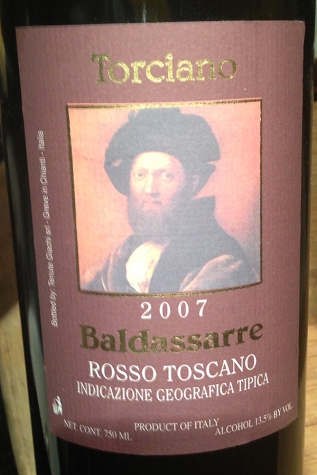 When we took our trip to Tuscany this past May, we visited the Tenuta Torciano vineyard in San Gimignano, where we enjoyed a fabulous wine tasting and lunch. The main course at lunch was a fantastic lasagna with Bolognese sauce, made from Mamma Torciano’s recipe and served with a drizzle of truffle oil. It was so good, that it not only inspired us to try to make it ourselves, but as we thought about what a wonderful dinner it would be to make and share, it also gave us further encouragement to launch Two at the Table. The lasagna was paired with a number of red wines, but the one that stood out the most was a the 2006 Terrestre. This wine was waaaay out of our usual price range, but we figured, “Who cares? We’re on vacation!”. Plus, we thought it would be a lot of fun to enjoy it again at home, ideally on our fifth anniversary.

When the wine arrived several weeks after we got home from our trip, we realized that storing it in our little wine rack in the corner was not the best way to treat such a special wine. We then remembered that our friends Tom and Sharon had not one, but two wine fridges, one for whites, one for reds. A plan began to take shape: in exchange for keeping our precious wine safe from curious kitty cats and at the right temperature, we would have Tom and Sharon over for dinner, when we would try our hand at making the lasagna. Tom and Sharon thought this was a great idea, so we settled on the first Saturday in January, partly because this is definitely a weekend dish, but mostly because that day was about halfway between their first anniversary and our fifth.

So, with all that as background, we set on making Torciano’s Lasagna with Meat Sauce on Saturday. (Please note that the link will take you to all the recipes you need for this dish, including home-made pasta, if you’re felling super-motivated!) Tony took the lead; here’s what he did:

I’ve made lasagna many times before but this time was going to be different, for two reasons. First, I was using fresh pasta, which we purchased at Chelsea Market’s Buon Italia. (We plan to buy a pasta making attachment for our stand mixer so that we can play around with making our own pasta, but store-bought seemed to be the way to go this time.) Second, I was going to follow the Torciano recipe and make a béchamel sauce; every time I’ve made lasagna in the past, I’ve used ricotta. I’ve made a béchamel sauce (basically a mixture of butter, flour, and milk) before, specifically for the Chiptole Mac and Cheese I brought to my office’s holiday pot luck lunch, so this was a not entirely new technique, but this was the first time I was going to make it for a lasagna.

My plan was pretty simple: first make the Bolognese sauce, then make the béchamel sauce, and finally assemble the lasagna, which I would put into the fridge until I was ready to start baking it. Since there was a lot to do and we wanted to have dinner at a reasonable time, I worked backwards from our planned dinner time of about 8:15 to figure out when I needed to start each step. (Kim got me into this habit and it’s critically important if you’re making a complex dinner and don’t want to eat it at 10:00 p.m.!) The lasagna needed 60 minutes to cook and 15 minutes to cool, so an 8:15 p.m. dinner meant the lasagna had to go into the oven at about 7:00 p.m. I gave myself an hour to assemble it (boiling the noodles, making the layers, etc.), so I figured I should be starting that at about 6:00 p.m. The Bolognese sauce take about three hours (about half an hour to prep and two-and-a-half hours to cook), so I wanted to start the sauce at 3:00 p.m. I figured the béchamel would only take about 30 minutes, so I thought if I started that at 5:30 p.m., just before the Bolognese sauce was done, I would be in good shape.

The prep for the sauce was pretty easy: I just diced some onion, carrot, and celery and that was it. I sautéed the veggies in olive oil over medium heat in our Dutch oven for about 10 minutes, then added the ground beef, which I cooked for about 15 minutes more. There was a lot of olive oil and rendered fat from the beef in the pot after this step. The recipe doesn’t say to drain any of it off, so I didn’t. I didn’t think the sauce was too oily despite leaving in the oil and fat, but you can drain it off it you want to. I next added the tomatoes and tomato paste, brought the mixture to a boil, and then simmered for two hours, uncovered, stirring occasionally, as the recipe directs.

At about 5:30 p.m., I started on the béchamel sauce. I knew this was going to be tricky, because it involves cooking things that are very easy to burn–butter and flour in one pot and milk in another. The key was to work at fairly low heat and to stir everything constantly. I started by putting a quart of milk in our small, heart-shaped, Dutch oven over medium heat so that I could scald it (that is, get it just short of boiling). While the milk was heating, I melted a stick of butter in a sauce pan and added 3/4 cup of flour. To avoid clumps, I first sifted the flour into a bowl using a small strainer and then poured the sifted flour back through the strainer and into the pot with the butter. I think this, plus the constant stirring, was the key to avoiding lumps in the sauce. I kept stirring until the milk got to the right temperature, which took about 10 minutes, and then added the milk all at once to the butter-flour mixture and stirred like mad until it had reached the right consistency. I added the salt, pepper, and nutmeg at this stage and let the pot sit. (Nutmeg isn’t exactly a traditional Italian spice, and probably one my very Italian Mother has never heard of, but it is a key to this dish.)

I did make two mistakes at this stage, one small and one larger. I should have put the milk on to scald a little soon than I did; this would have saved me at least a little bit of stirring. I also waited until the Bechamel sauce was done before putting the water for the pasta on to boil. I should have just put the pot on a back burner and then moved it to the front when I was done with the pot I was using for the milk. This wasn’t a disaster, but it did mean that the Béchamel got a little thicker than it should have been, because it had too much time to cool. I tried to address this by stirring a little more milk to the sauce, which helped, but eventually, I had to worry about boiling noodles and assembling the lasagna and didn’t want to have to deal with string the sauce. Not a big problem, but better timing would have help make the sauce easier to work with.

The pasta we were using came in fairly large sheets (about the size of an 8 1/2 inch x 11 inch sheet of paper), so I cut these in half so that I was working with pieces that were about 4 inches by 5 inches. I put two of these into the pot at a time and boiled them for only one minute, which turned out to be just the right amount of time. I scooped the pasta out of the water using the same little strainer I used for the flour, put it in a colander, and ran cold water over it. When the pasta was cool enough to handle, I picked it up gently, let a little water drain off, and then laid it on a stack of paper towels, flipping it once to blot off some of the water.

As the first batch of pasta was boiling, I had sprayed a lasagna pan with cooking spray, spread out a layer of Bolognese sauce on the bottom of the pan, and sprinkled some Pecorino cheese on the sauce. I laid the pasta on the Bolognese sauce (unless you cut them perfectly to size, the pieces will overlap, but that’s fine) and spread the Béchamel sauce over the pasta. I repeated the is pattern–Bolognese, Pecorino, noodles, Béchamel – four more times until I had a five-later lasagna and just enough Bolognese left over to serve over the lasagna. At this point, it was only 6:30 p.m.: I was a little ahead of schedule so I just covered the lasagna with foil, put it into the fridge, and Kim and I cleaned the vast array of pots and pans I has used to get to this point.

At exactly 7:00 p.m., I put the lasagna into a 375 degree oven, where it cooked covered for 45 minutes and then uncovered for 15 minutes more. Shortly after 7:00 p.m., our guests Tom and Sharon arrived with a lovely bottle of Veuve Clicquot, which we enjoyed with a simple antipasti platter (ordered from Fresh Direct to save on anxiety) of three kinds of Italian olives, marinated artichokes, grilled mushrooms, and caper berries.

I took the lasagna out of the oven and let it rest for 15 minutes, which allowed it to cool slightly and made it easier to cut. We served the lasagna with Bolognese and grated Pecorino on top and plated it with a green salad. When we had this dish at Torciano, it was served with a drizzle of truffle oil. We ordered a bottle of the truffle oil when we ordered the wine, so we were also able to replicate this part of the experience too.

The lasagna turned out great–maybe not as good as Mamma Torciano’s but absolutely delicious. The pasta was cooked perfectly, not quite al dente, but not too soft either. The Bolognese was thick with lots of flavor from the veggies. The Béchamel gave everything a nice creaminess and was a huge step up from the ricotta I’ve used in the past. The lasagna paired perfectly with the wine, which was bold and fruity and more than a match for this heavy, rich dish. (We opened a second bottle too, a 2007 Torciano Baldassarre, which was not quite as good as the 2006 Terrestre, but still very good.)

We finished the night with several rounds of an Italian card game called Seven and a Half and then enjoyed some almond cantucci (small biscotti) and a little Vin Santo as is the custom in Tuscany.

Our anniversary dinner was wonderful and more than worth the effort that went into it. We have a busy work week ahead, so it will also be nice to have some leftovers to fall back on. There’s even enough to bring some for lunch one day this week too!