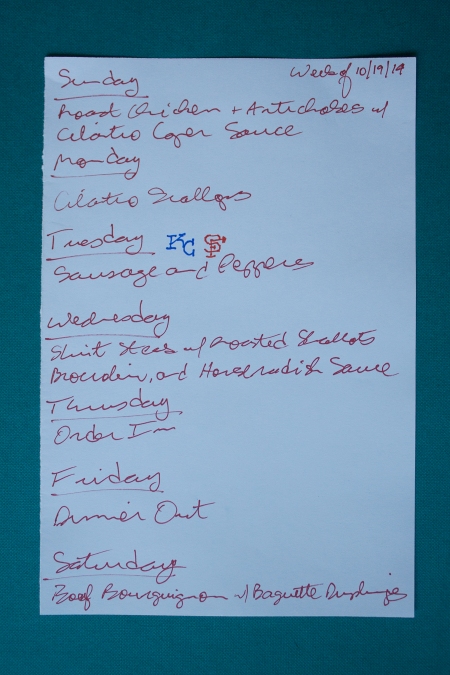 Kim is going to be away at a conference for a good part of this week, so Tony will be on his own for several nights. He resisted the temptation to make nothing but red meat and found a few recipes that we’ve never tried before.

We still have plenty of leftovers from last week, so Sunday night we’ll have Roast Chicken and Artichokes with Cilantro-Caper Sauce. We enjoyed this a lot when we first made it, so we’re looking forward to having it again tonight.

Tomorrow will be Tony’s first dinner alone this week. Since Kim is not the biggest fan of scallops, he decided to make Cilantro Scallops, which he’ll have with some avocado and tortilla chips. A margarita is also not out of the question.

In honor of the start of the World Series on Tuesday, Tony will make Sausage and Peppers, one of his favorite ball park foods. Rather than make a traditional sandwich on a roll, he’s going to eat this with bread on the side. He’s also going to use mini bell peppers, which we haven’t tried before. A cold IPA (or two or three) will wash it all down.

Wednesday night will be a red meat night, and Tony will make  Skirt Steak with Roasted Shallots, Broccoli, and Horseradish Sauce, which Kim found for him in the November 2014 issue of “Real Simple”. It’s a pretty straightforward recipe and should produce very tasty leftovers, perfect for a fun lunch later in the week. We have a bottle of red wine we’ve been waiting to open and this should give us a good excuse.

Kim will be back late Thursday night, so Tony will just order in. On Friday, we’re going out for beers and dinner with our good friend Joy. It will be everyone’s first trip to the famed Bohemian Hall beer garden in Astoria, New York, where Tony grew up, so we’re looking froward to seeing Joy again and hoisting a few beers in an entirely new place.

We’re going to finish the week with Rachel Khoo’s Boeuf Bourguignon with Baguette Dumplings. This dish is one of the ultimate French comfort food dishes, so we’re excited to give it a try and are especially looking forward to making Rachel’s very unique take on dumplings, which use day old French bread. This dish is major time commitment (it takes about three hours), so we saved it for a weekend night when we had no other plans; we’re  really looking forward to having the apartment smell like French goodness for the whole day. Beef Bourguignon is made with red wine, so we’ll have to get a bottle of two of nice French wine to go into this dish – and into us!