On Thursday night, we made a recipe of our own creation: Flatbreads with Wildflower Honey Goat Cheese, Arugula, and Grilled Peaches. We used things we already had in the fridge (frozen pizza dough and arugula) plus things we found on Long Island (the goat cheese and  peaches) to put together a fun dinner. Tony describes how he did it:

The very first step was to take the goat cheese out of the fridge so that it would have a chance to soften and become easier to spread.

The next step was to grill the peaches. First, I preheated our cast iron grill pan on medium-high. Then I moved on to prepping the  peaches. I started with two peaches as I figured that would be plenty for two flatbreads. Looking down at the top of each peach, I turned it so that the natural “crease” on the peach ran from left to right. I then cut all the way around the peach, following the line of this crease, with the stone preventing me from cutting the peach entirely in half. I then took the peach up in both hands, one on each side, and twisted gently until the peach split into two halves, one with the stone still attached. I popped out the stone and then set each half on the cutting board, top side down, so that I could rest the peach on its flattest side. (As a general rule, setting the flattest side of whatever you are trying to cut – assuming it has one! – on the cutting board is the safest way to go.) I then cut the peach, going from bottom to top, into 1/4 inch slices. The result was about six slices per peach, with most of the slices having a hole in the middle, much like a donut. (Kim and I ate the very end slices, which were too thin to grill.)  I grilled the peach slices for about three minutes per side, until they were softened but not falling apart and had some nice grill marks on them.

While doing all the above, I was also preheating the oven (and the cookie sheet I had placed in the oven) to 500 degrees. Using a lightly floured rolling pin and working on a lightly floured cutting board, I rolled each of two balls of pizza dough until it was about 10 inches across and about 1/4 inch thick. I used a fork to prick a bunch of holes in the dough to keep it from puffing up in the oven. I – very, very carefully – took the hot cookie sheet out of the oven, laid the dough on the sheet, and put the sheet back in the oven. I cooked the dough for a little less than 10 minutes (the directions on the package of pizza dough said 10 to 15 minutes, but that would have been way too long), at which point the dough was fully cooked and the edges were crisped up nicely. Despite my best efforts, the dough puffed up a lot, but it was pretty simple to just squash it back down.

While the flatbreads were cooking, I dressed the arugula with a little lemon juice, olive oil, salt, and pepper. Once the flatbreads came out of the oven, I started to assemble. I smeared each flatbread with half the goat cheese, which by now had softened nicely, piled on half the arugula, and laid half of the grilled peach slices on top. I sprinkled each flatbread with a little flur de sel (French for “very fancy salt”) to heighten all the flavors and cut each one into four slices using a pizza cutter. 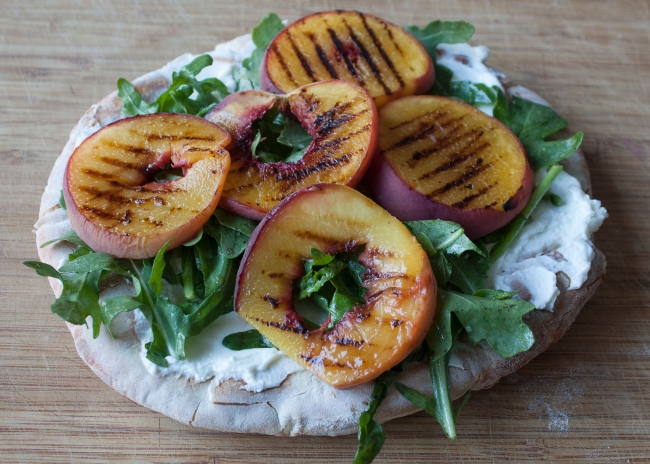 We didn’t know what to expect from this dish, as we rarely make dinners that tend toward the sweet side, but it was awesome. The goat cheese and peaches were sweet but not overly so and were balanced by the peppery flavor from the arugula and the bite from the lemon juice in the salad dressing. While the peaches and cheese were soft, the arugula and especially the crisped up edges of the flatbread gave everything a nice crunch. Since we were using pizza dough, the flatbreads were also nice and chewy at the same time, adding another layer of texture. A very successful experiment for Two at the Table!