If you’ve been following our blog, you know that last week Tony made two batches of pickles using two different recipes: Alton Brown’s B and B’s, and Lori Lange’s recipe for bread and butter pickles on her fantastic Recipe Girl blog. This Fourth of July, Two at the Table had our official pickle taste-off. Tony gives the results.

We had made plans to take a day trip on the 4th of July, but the weather was a little questionable, so we decided to stay home. As a result, we were able to make our traditional Independence Day lunch: burgers, fresh cole slaw, potato chips, and of course, bread and butter pickles. Unlike previous years, however, we had two kinds to try this year.

On the left in the photo above is the current champion and perennial crowd pleaser, Alton Brown’s B and B’s. On the right is the challenger, Recipe Girl’s bread and butter pickles.

Alton’s pickles are a bright greenish-yellow, as shown in the photo below, because the recipe uses more turmeric. They also have a different flavor profile because they contain spices (including cloves and allspice, which are the little “twig” and “ball”, respectively, in the photo below) that the other recipe does not. They were very sweet and crunchy and perfect with the burgers.

Recipe Girl’s pickles were a lighter green, as shown in the photo below, because they use less turmeric. They also had a nice sweetness to them, but it was a more subtle sweetness that let the flavor of the cucumber come through. The sweetness also worked on multiple levels because of the two kinds of sugar used in the recipe. They were also nice and crunchy and a good complement to the burgers; Kim even put some pickles directly on hers. 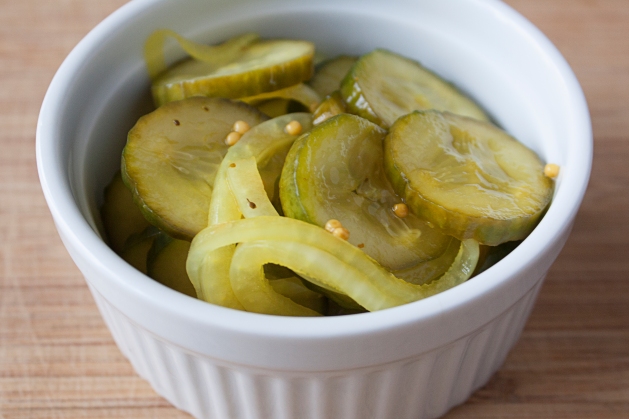 After a hard-fought contest and much deliberation by the two judges, the winner is…Recipe Girl’s bread and butter pickles! We love both recipes, but Recipes Girl’s pickles win out because of the great balance between sweet and savory. The best part is, we still have one whole Mason jar full of each kind to enjoy in the coming weeks!