With the Fourth of July coming up, Tony figured it was time for his annual, summertime ritual of making bread and butter pickles. This year though, he decided to try something a little different:

For the past couple of summers, I’ve been making bread and butter pickles. If you’re not familiar with them, they are thin-to-thick pickle slices that are more sweet than sour because sugar is added to the brine. They’re great with all sorts of barbecue, burgers and hot dogs, and, of course, sandwiches. The name, at least according to a couple of internet sources, originated in the Great Depression, either because a) they were eaten as commonly as bread and butter or b) were eaten for lunch with bread and butter.

My go to recipe has been Alton Brown’s B and B’s, which have never failed to please and have garnered me lots of compliments along the line of “You made these? They’re awesome!” Last week, however, I came across a new recipe on Twitter that was very intriguing: Lori Lange’s recipe for bread and butter pickles on her fantastic Recipe Girl blog, which you have to read if you haven’t yet. What really caught my eye about Lori’s pickles is that the recipe uses both white and brown sugar. I decided that I needed to have a (very informal) pickle-off and try them both side by side.

Both recipes contain the same two key ingredients: sliced cucumbers and sliced onions. For the cukes, I used smallish, thin pickling cucumbers that I purchased at Whole Foods. They are straight and about an inch thick, a shape and size that give nice round slices, and about six inches long. Lori’s recipe specifically calls for sweet onions, while Alton’s doesn’t specify which kind to use. We have a mandolin, but I did all the slicing by hand, which took a little while, but was somehow very satisfying. If you don’t know, a mandoline is a cutting device. It’s basically a long, thin platform on short legs with a raised blade in the middle. You run whatever you want to cut back and forth across the platform (by hand of course) and the blade does the rest of the work. We have one, and it really does speed things up. Despite the safety features, I have an innate distrust of the thing and rarely use it, as I suspect “mandoline” is French for “finger-detatcher”. 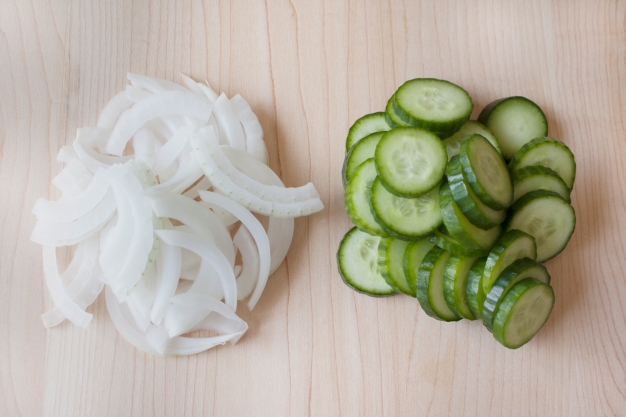 The spice mixes for the two kinds of pickles are similar, but not identical, either in type or in quality, as the picture below shows. Alton’s recipe, which is the left plate, uses equal amounts of (clockwise from top left) mustard seed, celery seed, turmeric, and pickling spice, while Lori’s uses (clockwise from top left) much more mustard seed, much less turmeric, the same amount of celery seed, and no pickling spice. I’ve already mentioned that the two recipes use different kinds of sugar, but they also use different kinds of liquid: water and cider vinegar for Alton’s recipe and white vinegar and cider vinegar for Lori’s.

The methods for the two recipes are also a little different. Lori’s recipe calls for salting the pickles, putting them in the fridge for 1 1/2 hours, and then adding the brine. This worked out really well, because Alton’s recipe doesn’t have a salting step, so I was able to make the two batches in parallel; the 1 1/2 hours was more than enough time to finish his recipe. This is a good planning tip to remember: if a recipe has a long stretch of down time, it’s a great opportunity to work on something else, like cleaning up the kitchen, making another dish, or just testing the beer or wine for proper taste, temperature, and quantity.

When preparing the brine, you want to make sure you simmer it long enough to dissolve all the sugar and open up all the flavors of the spices. One final note: boiled vinegar can be a little, shall we say, pungent. It’s not super stinky, but if you leave your kitchen / apartment and come back later, you will notice the smell. It should dissipate after a little while and is a small price to pay.

I’m going to let both kinds of pickles sit in the fridge for a week and then try them both Fourth of July weekend. Check back in then for the results of the pickle-off! 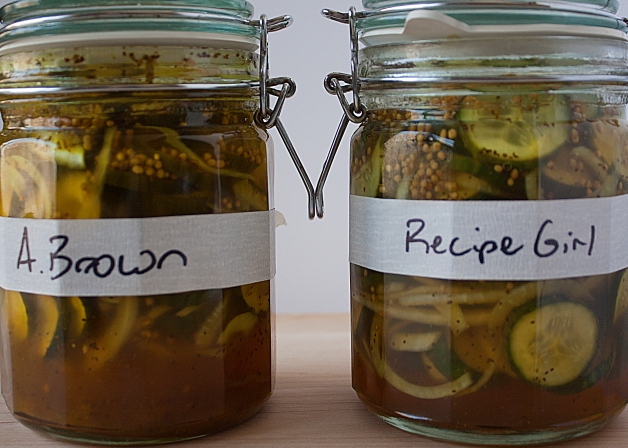