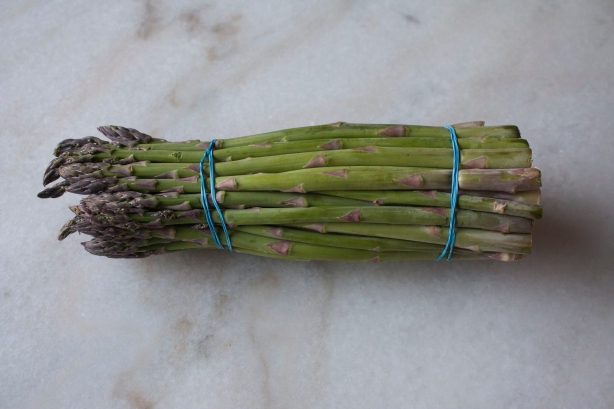 Tonight we made Penne with Asparagus, Sage and Peas, a simple pasta dish that we thought would be perfect for a Friday night when we didn’t want to do a lot of complicated cooking. Tony describes making the dish:

There was a little prep work to do at the start, but nothing too involved. This was a good opportunity to practice “mise en place”, a French phrase that means “putting in place”, as in prepping and organizing all the ingredients I was planning to use. This can be a little tricky in a small work space, but I was able to do it this time, since the recipe is so simple. You can get away with just prepping the things that need to be chopped, sliced, etc., and using the things that need to be measured, like liquids and spices, as you need them, but in my experience, this can make it easier to forget to add something.

First there was a little knife work: slicing the asparagus and chopping the garlic and sage. Since we don’t usually keep grated parmesan in the fridge – we think it tastes a little better when we grate it fresh – the next step was to grate the cheese. I got the peas out of the freezer (no need to measure since we were using all that we had left) and the right amount of butter out of the fridge. The last step involved measuring out the liquids: two cups of chicken stock, which was used to boil the asparagus, a quarter cup of cream, which was used to make the sauce, and a glass of wine, which was used to keep the cook happy… 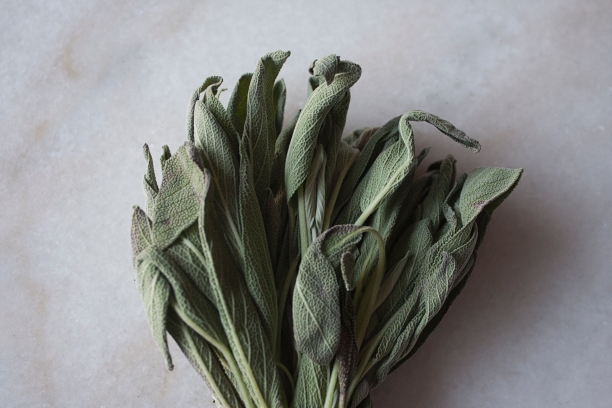 I basically followed the recipe as written, since this was our first time making it. The only changes we made grew out of the need to use what we had on hand. For example, the recipe says to use thick asparagus, but we used a bunch that was very thin. I can’t imagine this changed the taste of the dish in any way, but having thinner pieces probably made it look a little more elegant than if we had used great big hunks of asparagus. Also, we only used one cup of peas, since that’s all we had in the freezer.

Time guidelines are usually pretty helpful, but how long something actually takes will depend on lots of things, like the pot you’re using and how much heat your burners put out when set to “High”. (In our kitchen, the answer to that last question is “enough to smelt iron ore into steel”.) It takes a little practice to know when something has reduced by half. Take comfort in the fact that if you reduce too much, you can always add more liquid. Plus keep in mind that asparagus is a pretty tough veggie, so an extra minute or two of boiling for this recipe probably isn’t going to ruin it.

Thickening a sauce, however, is a little trickier, as there’s a chance you might burn it. Depending on what you’re making, there are way to test for thickness. Probably the most popular of these is whether the sauce coats the back of a spoon, but that won’t work for every recipe, including this one. Again, it takes practice. I also ask myself two questions as I’m reducing the sauce. Is there anything I’m going to add later that will make the sauce thicker? In this case the answer was yes: the parmesan. That gave me a little leeway, so I stuck much closer to the three minutes in the recipe. If I’m not adding anything later, and there aren’t more “reduce” or “thicken” steps coming up, the second question is a simple one: how does it look? If it’s soupy and runny, it’s going to look terrible on your plate and more important, won’t stick to anything – except the bottom of your plate.

The final result, as you see below, looked pretty good and tasted even better. For a simple dish, there was a lot going on. There was sweetness from the peas, a little bitterness from the asparagus, and lots of savory flavor from the sage. This dish also has a nice mix of textures: soft peas, al dente pasta, and still crunchy asparagus. We make a similar pasta recipe with peas and lettuce (sounds a little odd but it’s very good!) that uses pancetta, which we thought would be a fun thing to try next time. We might also go to the other end of the spectrum and make this dish vegetarian but replacing the chicken stock with veggie stock. For tonight though, it was the perfect dish to close of the work week.